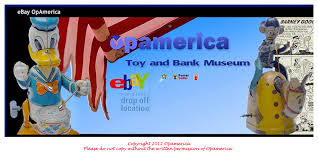 I saw this Wyandotte toy a day ago on ebay, so I decided to post it on my blog.
What's different about this toy is that it is a wind-up toy of ducks that move.
It's probably a toy that is much later than the 1930's toys which seemed to be
mostly trucks and cars of pressed steel.

If you examine the cardboard, you will see that there is no ZIP code of any kind on the box.
Large American city ZIP Codes (Zone Improvement Plan)first appeared in 1943 , and they were
2-digit codes.  In July of 1963, 5-digit ZIP Codes were announced for the whole country.

A Bit of History:

Initially, All Metal Products Company specialized in toy guns, including pop guns, water pistols, and air rifles. Their slogan in the 1920s was "Every Boy Wants a Pop Gun." By 1927 they had become the world's largest manufacturer of toy guns. Wyandotte Toys stopped manufacturing air rifles in 1929, but continued to dominate the toy gun market throughout the remainder of their history by producing pop guns, clicker pistols, dart guns and pistols, cap guns and a variety of plastic pistols. In 1929 the company added girls' toys and toy vehicles, as well as lithographed novelty toys in 1936. Metal toys were banned during World War II because the metals were needed for the war effort. The company survived by producing wooden toys and die-cut cardboard "build your own" play sets during the war. All Metal Products also manufactured en bloc clips for the M1 Garand rifle. Clips of this nature will be stamped with "AMP1" on the rear of the clip.*

Posted by toysearcher at 4:42 AM