The autumn weather continues to still amaze everyone. The sun is shining a lot, and the  temperature is still above normal for this time of year. I've continues to cycle, although have my fall thermals on to keep me warm. The mornings are usually cold and damp, so I always follow the old expression - "it's better to have to take off clothes than to not have the proper clothing on a cold day".

I decided to visit an old company on ebay who has helped me out in the past. I haven't blogged as much as I used to , but I still get motivated to write the occasional post.  And if you don;t know by now, I'm always happy to have anyone volunteer to send me their toy photos, and to write a short narrative accompanying the toys.

a set of four (4) Captain Marvel Lightning Racing Cars.  These cars are numbered 1 - 4 and feature great colorful litho graphics of Captain Marvel on the sides.  Each car measures 4" in length and has a side wind up slot for keys.  No keys are included.  Sides marked "Automatic Toy Co., NY", and "Cop 1947 Fawcett Publications, Inc".  Parts are all original. 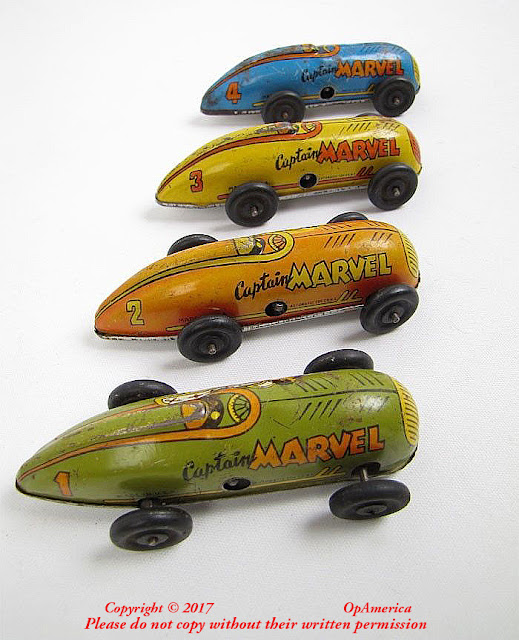 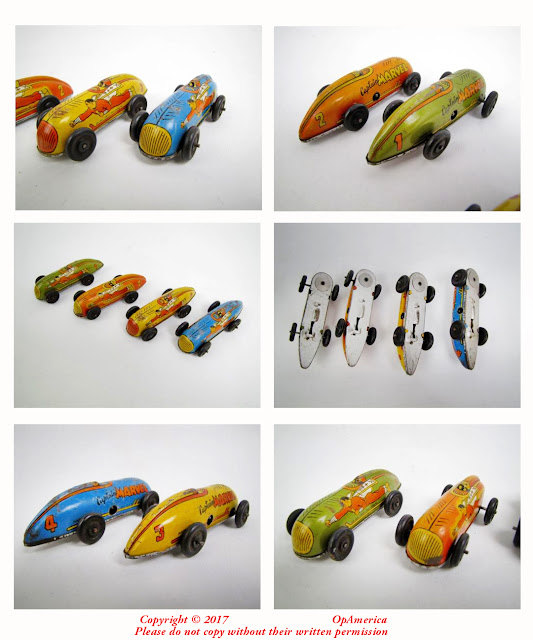 What interested me was the story behind these toys.

Fawcett Comics, a division of Fawcett Publications, was one of several successful comic book publishers during the Golden Age of Comic Books in the 1940s. Its most popular character was Captain Marvel, the alter ego of radio reporter Billy Batson, who transformed into the hero whenever he said the magic word "Shazam!".

Fawcett Publications began in 1919 with the magazine Captain Billy's Whiz Bang and eventually expanded into a line of periodicals with a combined circulation of ten million a month. The company joined in the explosion of comic book publications in the United States in the late 1930s and early 1940s. Its initial entry, developed by writer Bill Parkerand artist C. C. Beck, was Thrill Comics, a single issue of which was published only as an ashcan copy. The content was then reworked (for example, the lead character of Captain Thunder was renamed to Captain Marvel) and published as Whiz Comics #2 (Feb. 1940).

The whimsical adventures of Captain Marvel and the Marvel Family (which included Captain Marvel, Jr., Mary Marvel, theLieutenants Marvel, etc.) eventually outsold those of Superman. National Comics (as DC Comics was then known) sued Fawcett, claiming that the Captain infringed on the copyright of their original costumed superhero. National Periodical's 1941 copyright hearing against Fawcett was dismissed on a technicality; National had failed to secure the copyright to theSuperman newspaper strip.

Thanks for dropping by,
and as always,
have a great part of the day or night,
Wherever you may be.

Posted by toysearcher at 7:04 AM No comments:

Today, I received an inquiry asking if I could identify 2 small cast iron toys. I answered Mr. Chuck from North Carolina, and of course, asked if I could have his permission to post his fine photos. I was "rusty" since I haven't been posting much lately, but decided to search out for an answer. The toy looked American and I've only ever found 1 Swedish manufacturer of cast iron toys. The American manufacturers were A.C.Williams, Arcade, Champion, Hubley, Kenton, Kilgore, and Vindex.

Vindex made some of the finest cast iron toys, but there were never any cars made. They manufactured mostly farm machinery. The 2 cars that Chuck sent, appeared to be from the late 1920's or early 1930's, and that eliminated Kenton. Hubley didn't make that cars with the thick gauge wire that help the top and bottom pieces together, so I was left with 4 manufacturers. 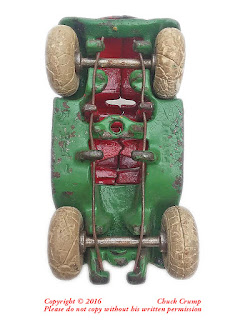 The thick wiring on the underneath part of the car was a patented invention.
It help the top and bottom parts of the toy together.
These patented feature eliminated the Champion company. 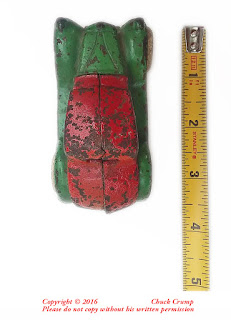 The size of these 2 cars are very small for cast iron toys. Also, the rubber tires are huge in proportion to the car body. This eliminated the A.C.Williams and the Arcade companies. 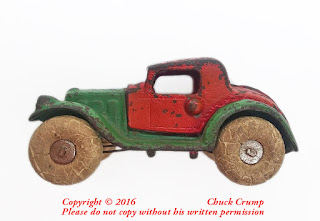 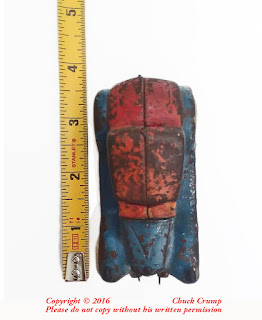 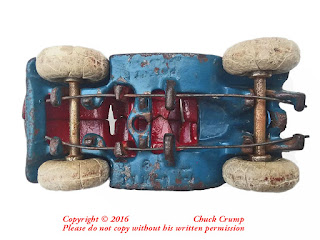 Although I was "rusty", a term meaning not having worked much, I decided
to select  the Kilgore company and do a search.  I entered search for
"Kilgore take apart cast iron toys",
and came up with several results.

The photo below is from GrandOldToys. 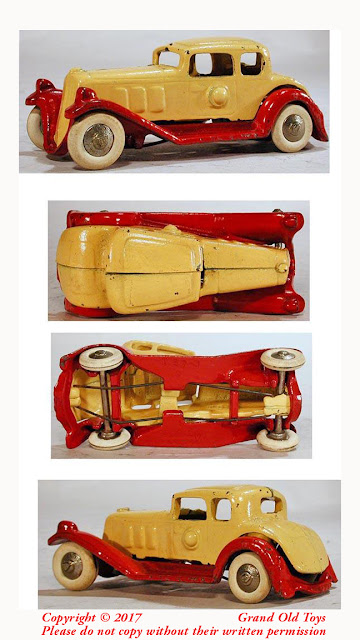 Grand Old Toys has allowed me to use their fine photos for writing my blog. It's a very reputable company that sells a lot of antique toys, and you might want to have a look there.

I haven't added any other photos because
I didn't send letters to ask for permission.  However, the links below will
allow you to see that results that I found.

I was fortunate to come up with 3 searches that I was able to find photos of. When one does a search, the results (I use Google), allow you to change from addresses to "images". This allowed me to find examples of cast iron toys with large balloon tires, and the patented heavy gauge wiring connecting the top and bottom of the toys.

I was "very lucky" today to be able to find results for Chuck.
It's not always so easy to find answers to people's questions, and that is why I add post to see if anyone of my readers can help in finding the answers. Most of the time, nobody answers my "plea" for help.

So that's it for this very cold Autumn day. I've been spoiled by the unusual warm weather that we've had for September and so far in October, but I know that one day, I will awaken to snow. So today, I took in all of our lawn furniture, and tomorrow, I will change my summer tires for winter ones. It's early fir winter tires, but my brother Michael is coming into Montreal at the end of October, and wants to go to Quebec City.

I better bring my snow shovel by then. You never know what weather you'll have in Quebec City!

Posted by toysearcher at 11:20 AM No comments:

The upcoming auction by renowned American toy auctioneer Bertoia Auctions will take place on November 11-12, 2017. The auction itself has many wonderful toys, but one of my favourite categories is the American cast iron toys. These toys were manufactured in the early 1900's-1930's, and what I like about them is how they feel. They're smooth, cold to the touch and heavy.

When I and my brother were young, our father would take us fishing. We enjoyed fishing at an early age, and never tired of it as we matured into adults. I even went on a fishing trip in June of this year and fished for northern pike and speckled trout.

The above Hubley speed boat is modelled after a Penn Yan boat. This particular toy was manufacturer by Hubley, but had a limited production life. The reason for this was that Hubley never received permission to manufacturer this model after the real speedboat.
The length of this boat is 13.5"  (332.90 mm). The motor is modelled after a famous American manufacturer of outboard motors by the name of Johnson, and the specific model of motor is the Johnson Seahorse. Interestingly, there are people who collect these very old motors, and who completely restore them to working condition. Not bad for a boat motor from the 1930's and later! 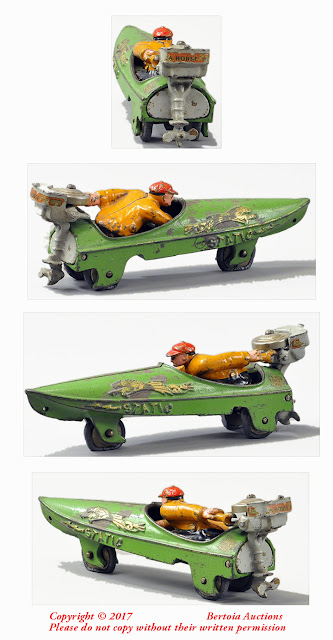 The models above and below  were manufactured for a longer period, as their design was done by Hubley, without having to ask for any person from a real-life boat manufacturer. The toy came in a variety of colours, as you can plainly see, above and below.
The length of this boat is 9.5"  (231.30 mm)

The model above  is a "deluxe" model" that has blue waves cast at the hull. The cast iron waves make this model more valuable at the auction block. 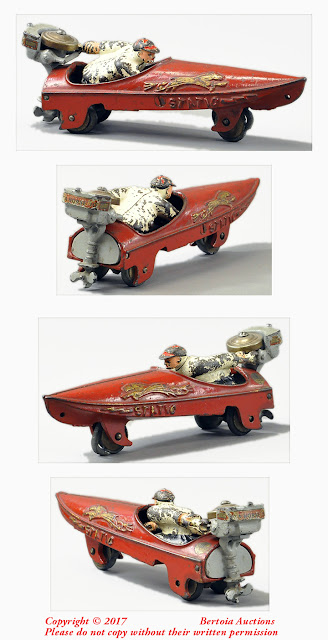 I've written about these Hubley boats and motors before, but decided to add another post. The reason is that these photos were photographed much closer up, and thus showed better detail than the original post that I created several years ago.

So that's it for this rainy day. Fortunately, September and October have been unseasonal. September has a 3 week span of warm temperatures, and sunny skies, while October has been also warm, with sun, and of course rain. The big question is what will the rest of the fall and winter be like!

Thanks for dropping by,
and as always,
Have a great part fo the day or night,
Wherever you may be.

Posted by toysearcher at 6:55 AM No comments:

The Big Ships are Coming

The Big Ships Are Coming

One of the first Auctioneers that I had the privilege and  enjoyment to write about was the famous American toy auctioneer - Bertoia Auctions.  As I was browsing at what  in coming up at Bertoia Auctions, I came across a great auction that is scheduled for November 11-12, 2017. There are a lot of fine toys such as Lehmann, cast iron, and European. But what caught my attention most were the unique antique toy ships from Marklin. These fine toys are wind-up toys from the  early 1900's.

This battleship has every feature imaginable, from its many cannons of several different sizes to its detailed flag masts and multi-story deck, Marklin didn't spare any detail. The boat features two exhaust stacks, two detailed deck cranes with winch and chain, many different levels of deck all lined with hand soldered railings, and classic warship colouring. 28"(70.43 cm) in length. Both cranes & two lifeboats are replacements, two funnels touched up, areas of masts reattached, otherwise in paint in (Pristine Condition)

The first thing that grabs your eye with this Marklin battleship, "Tirpitz", is the impressive
riggings and the tall masts that are complete with guy lines., flags, and crows nests, masts
tower over the ship and its' busy deck that features 2 large cranes for dispatching its'
lifeboats, many gun decks, and several different levels that make this boat
very complex and unique, decks are hand-painted to simulate wooden planking, an overall
extraordinary watercraft that only Marklin could produce, Professionally restored and aged.
Length:  34"  86.36 cm

High detail and impressive profile easily live up to its namesake "Majestic". From its'
hand-painted port holes and windows on the hull, to its' hand-soldered stairways and
deck railings, this boat is a great example of the beautiful imaginative toys that
Marklin was capable of creating. It features many deck guns, including one large cannon between its' large masts, and features two exhaust stacks complete with guy lines to keep them stable on rough seas. Majority of the paint on the ship is original with some small enhancements in areas,
paint is lightly flaking throughout, appears to retain original accessories and appointments with minimal soldering at masts and stack sleeves, red water line is repainted.
Length:  34"   (86.36 cm)

I've only presented 3 of these fine ships, but there are many more on the Bertoia Auctions website, so please venture over there to have a peek.

As always,
Thanks for dropping by,
and have a great day,
wherever you may be.


Please click here to visit this fine American auctioneer
Posted by toysearcher at 11:08 AM No comments: