A Reader asks about

I recently received an e-mail from Sharon Spencer inquiring about a toy car she has in her possession. Sharon describes it as a 1940's or earlier Hiller Tether Car, but she is not sure, as there is no engine inside this toy. She asked me to investigate the car to find out information about it, and to see if in fact it is a Hiller original. however I couldn't find anything about it. What's interesting is that this fire engine has the sticker with the name "Hiller" on the front of the fire engine.

Below are the dimensions of this toy 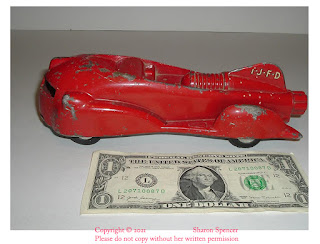 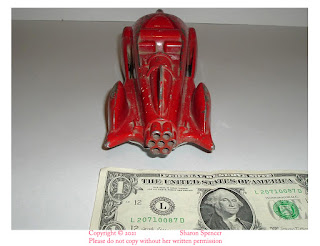 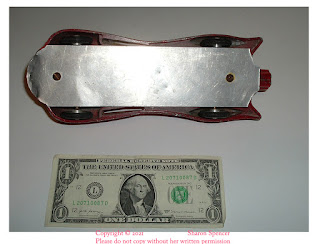 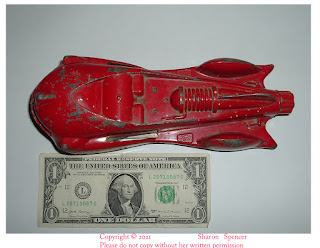 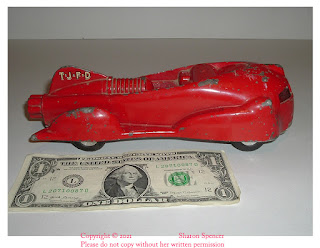 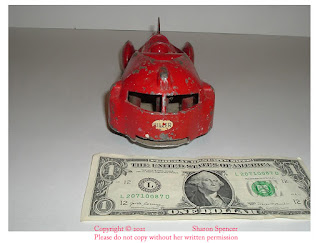 Sharon also mention that the inside of the toy does not show anything inside, especially a motor. Tethered toy cars were much larger than this fire engine, and also had small engines built into them.
For those who don't know, a tethered motorized toy car was attached to a long line. The "driver" of the toy would start the engine, and then have the car spin around and around. Some of the speeds that were recorded were up to 200 miles per hour! Also, Stanley Hiller  Jr. was a very entrepreneurial  teenager who made and sold tethered cars and made great money by the age of 17 in the early 1940's.! As he got older he started to produce helicopters.  His biography on helicopters can be found at https://en.wikipedia.org/wiki/Hiller_Aircraft
So, if there is anyone out there who can identify this toy, please write to me at
toysearcher@gmail.com
I'll then forward the information to Sharon.
Thanks, as always for dropping by, and have a great day wherever you may be.

Posted by toysearcher at 11:39 AM No comments:

A Reader Wants to Sell A Lincoln (Canada) Steamshovel

Asking for a Price Estimate

Recently, I received a few questions about an old Lincoln steamshovel. Victor Olson wanted to know if anyone would be interested in buying this you, and what was the value of it.

The history of the Lincoln Toy Company is interesting:

"Lincoln Toys of Windsor, Ontario, made and distributed a large line of pressed steel toy trucks, tractors and even a TCA airplane. For many Canadians born after World War II, the wide range of pressed steel toy trucks known as Lincoln Toys were an important part of childhood. Lincoln Toys produced some of the best known and most commonly seen Canadian toys. Most examples show the obvious signs of children’s play, but one can occasionally find a Lincoln Toy still in its original box, in mint condition.

Below are 3 photo of the toy: 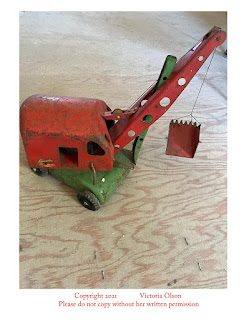 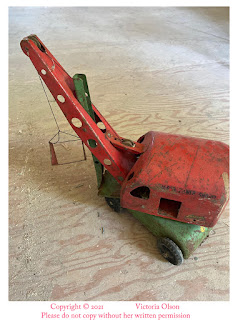 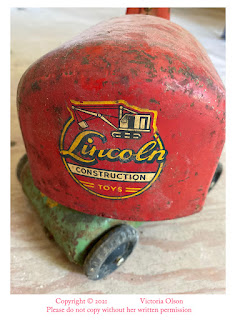 Victoria Olson's e-mail address is: vjolson17@gmail.com
Also, I have to add a disclaimer, as I have never offered anyone space on my blog to offer a toy for sale:
Disclaimer:
I have no connection with the seller, nor am I making any money or getting anything in return for my offering her to add her toy here for sale.
So that's it for today as far as a toy post goes. I hope all is well with everyone, and that you've received your 2 vaccinations for COVID-19. I've received my 2 vaccines and I feel safer (but who knows). Canada and the provinces (equivalent to states in the USA) are relaxing the rules, and opening movies to the public gatherings in churches, mosques, and synagogues up to so many people. Restaurants are opening, but I think only for so many people.
Thanks for dropping by,
and have a great day.
Stacey Bindman

Posted by toysearcher at 10:01 AM No comments: