A Collector of Pull Toys Contacts Me


A Collector of Pull Toys Contacts Me

I don’t know exactly what you are looking for but I will give you some information. I started collecting old wooden toys a little over three years ago after buying a box full at a local auction I attended near Waynesboro, Ga. One of the toys was a Ted Toy-lers Walking Soldier pull toy. I had never heard of Ted Toy-lers so I decided to do a little research. I came across a website, oldwoodtoys.com. The site belongs to Jim and Judy Sneed. I contacted Jim and discovered that Ted Toys were very hard to find. He told me that his wife had sold most of her collection. He had about five or six left along with several parts. I bought all of them. Jim and his wife are the premier experts on Ted Toy-lers toys, along with several other companies.
I bought several toys online, and in the process met Peter Thomashow. Coincidentally, Peter was one of the two individuals who purchased several of Judy Sneed’s Ted Toy collection. I bought all of Peter’s Ted Toys as well. Since that time we have become friends and we talk toys almost daily. I’m in the process of purchasing some very rare Toy Tinkers toys from him at the present time.
I won an original Ted Toy-lers box online and the seller told me the backup bidder wanted to meet me. He gave me his contact information. The backup bidder was Richard Mueller. I had already heard of him from Jim Sneed. He is known in toy circles as the Pull Toy Professor. He owns a toy museum on the Mississippi Gulf Coast that is incredible to see in person. Richard and I trade toys and I count on him for guidance as I learn more each day about old wooden toys. You won’t find better people that Richard and his wife, Linda. Richard is who bought the other Ted Toys that Judy Sneed sold. Through Richard, I began to progress beyond Ted Toy-lers toys and started collecting many other companies. Richard’s collection consists of toys from over 175 companies. I prefer to collect from approximately 25 different companies.
I was searching for toy collectors online one evening and came across an ad in a local publication. It was someone wanting to purchase Rich, Hustler, and Ted Toys. The man’s name was Perry Eichor. I had seen his name on Jim’s website a few times so I contacted him. I struck a deal with Perry that included approximately 60-70 toys. Perry was a major Rich and Hustler collector so many of the toys I purchased from him are rarely, if ever seen. I’m in the process of working a deal with Perry for several Cameo and Ideal dolls.
So, along with networking with Jim, Richard, Peter, and Perry; I also network with individuals all over the United States that contact me when they find toys. Brooke Larsen, Gary Cenname, Tracy Tedder, Mike Jones, Keith Spurgeon, and Kevin Mcguire (Playful Plans) to name a few. I let them know when I find toys they might want.
I surmise I have about 3,000 toys in my collection. Many are the best known or only known examples. To put it in perspective, I would surmise that Richard has over 10,000 toys. Although I buy anything I find interesting, I concentrate on the following companies: Ted Toy-lers, Hustler, Rich, Toy Tinkers, International, Buck-A-Roo, Scarey Ann, Wilson Walkies, Newton Thompson, Fulton, Hyker, Gibbs, Gluck, Performo, Jaymar, Twistum, Cameo, Ideal, Strombecker, Gong Bell, All Fair, Go-Toys, Reed, Bliss, Bumpa, and Crandall.  Complete toy histories for these companies and many others are available on oldwoodtoys.com. Here are a few reference pics from my collection: 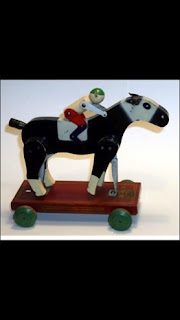 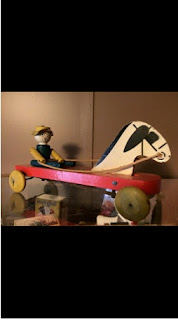 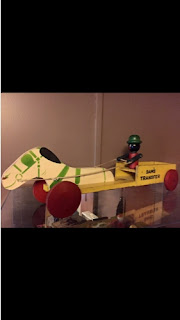 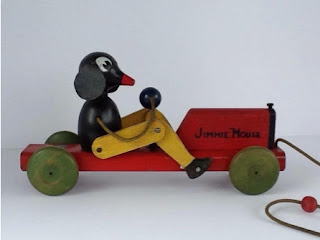 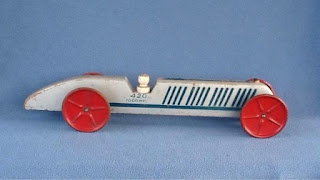 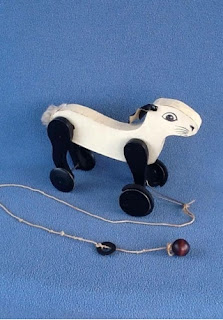 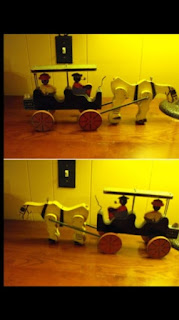 As you can see, Steve is quite involved in being knowledgeable about pull toys, as well as knowing many people who collect similar toys. One of these people is Mr. Richard Mueller. If you Google "Richard Mueller", you will find his website and correspondingly his toys.

I haven't added much written dialogue on of my own, As Steve did a fabulous job with his written narrative. It's certainly amazing how may different toy manufacturers of these pull toys that exist, and whose names I have never come across until now.   It's great to have readers communicate with me, because I like to "discover" new "old toy manufacturers" from way back when.

Thanks to Steve Mayo, I'll have plenty of new manufacturers to search out over the summer.n

Thanks Steve for your help and willingness to share your knowledge and toys with us.

As always,
thanks for dropping by,
and have a great day,
wherever you may be,