I was pleasantly surprised to receive an e-mail from Mr. Christopher Ferrone of Chicago, Illinois (USA). He asked had my winter had been, and presented me with a series of photos of a 1941 Steelcraft bus.  If you follow my Blog, Chris is the president of a  called Americoach Systems, Inc. which is a Specialized Transport Technology, Safety, Management and Logistics company. How Chris manages to restore and customize toys on top of being the president of a busy company is beyond me, But I assume it's his passion and his liking to work with his hands.

As far as the winter was up here, it was "varied". Warmer than usual but February and March were cold, and March 21 and 22 still had snow.  Unfortunately, we don't really have a spring to speak of up here in Montreal, Quebec (Canada).  While our west coast of British Columbia now has their flowers starting to grow, we still have cold weather. The warm weather doesn't really start here until mid-May.

As far as the 1941 Steelcraft bus goes, it is rare. As Chris explained  for the toy being "special", the reason being that it was manufactured in 1941 during the WWII years. Metal was being used for the war effort, and many toy manufacturers were asked to use wood  instead of metal by the USA government. 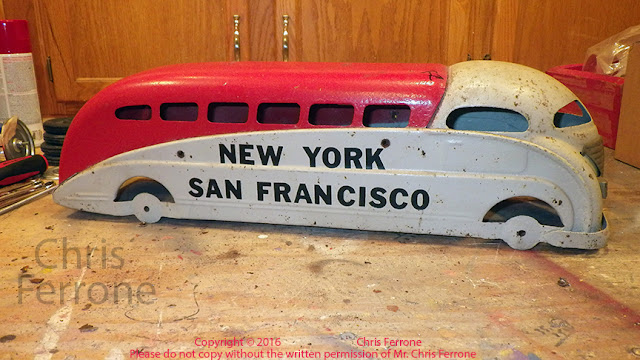 For a 75 year old toy, it's actually in a very good condition 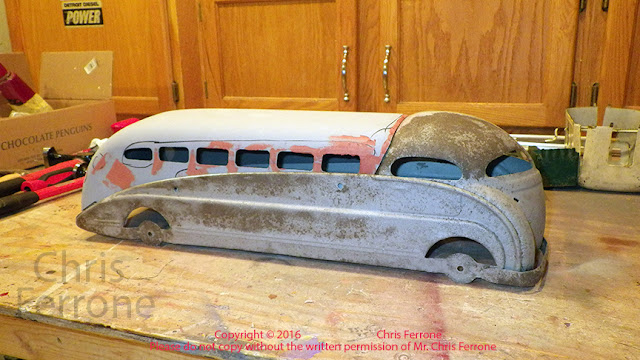 The paint has been removed, the lettering removed, and auto body filler has been added to smooth out any dents or rust.

The finished Steelcraft bus, beside a smaller Trailways bus. Notice the red and yellow colour theme that CHris used on his restoration. 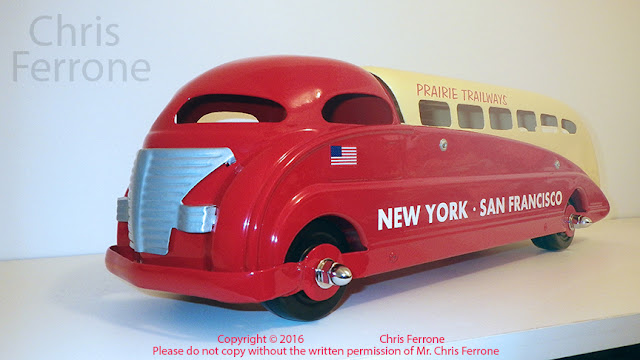 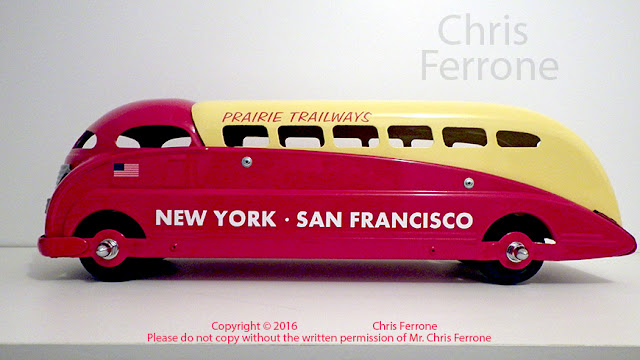 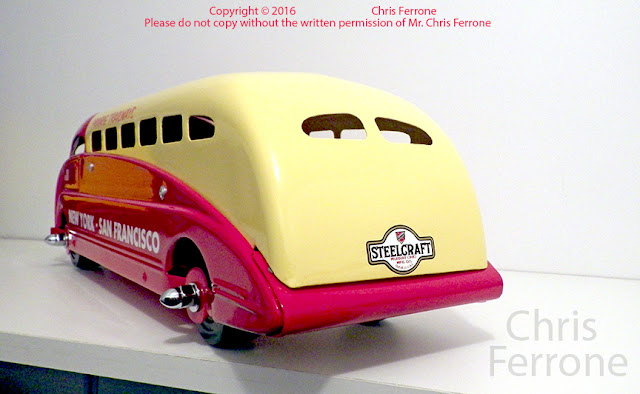 A nice trio of photos illustrating the finished final result.
I'm sure this toy will be around for another 75 years!

And so once again, Chris has done a fabulous job restoring an old toy.

Thanks Chris for another fine toy and helping out with my blog.

What is it - can anyone help?


What is it - can anyone help?

From time to time, I receive requests from people asking if I can identify their toys. I'm by far no expert, but if I can't help, I ask the owner to send me photos of his/her toy, and I will add a post. I also ask if anyone might help out to identify the toy. Since  more readers read the post, hI'm hoping that someone out there has a similar toy or knows who made the toy.

I received a request from Mr. Charles Francis to help with his toy. Charles hadn't sent photos, so I asked if he might send photos and I could add a post especially for him.  I received the photos today, and sized them for the blog.

Below is what Charles wrote, so I hope that someone might be able to help out.

"Thanks Stacey.
I have attached some pics.  The toy is about 9-10” tall, the head and hands seem to be plastic or molded something (not metal). It is a wind-up and the legs and feet move. The feet are cast iron. I have tried to find something similar with no luck. Only close thing was a happy hooligan from 1905.
Appreciate any assistance you can provide. The fun is finding out what it is.
Thanks so much,
Charles" 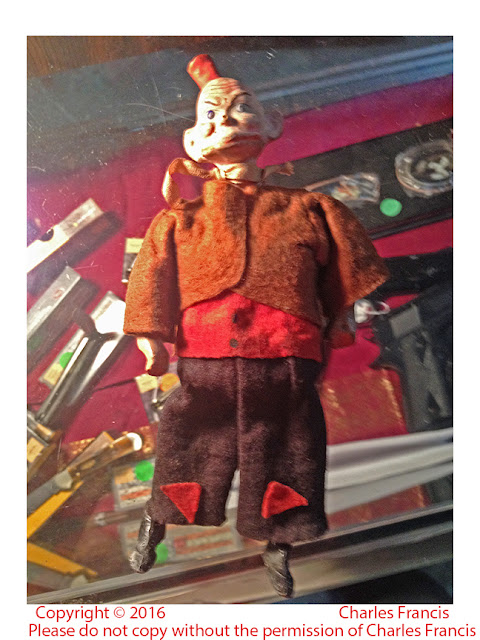 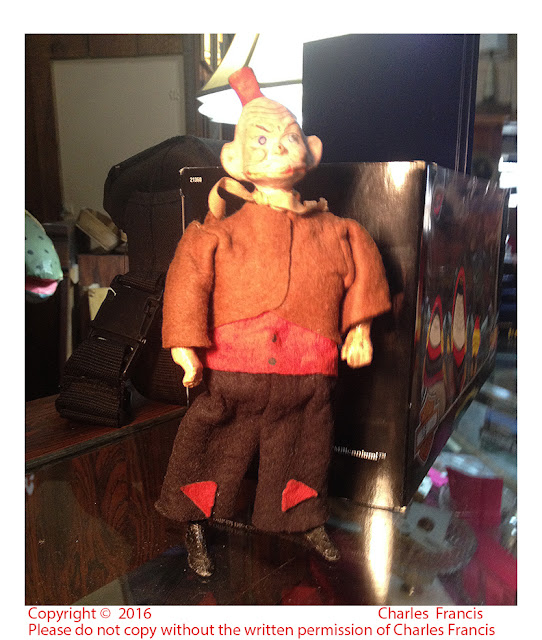 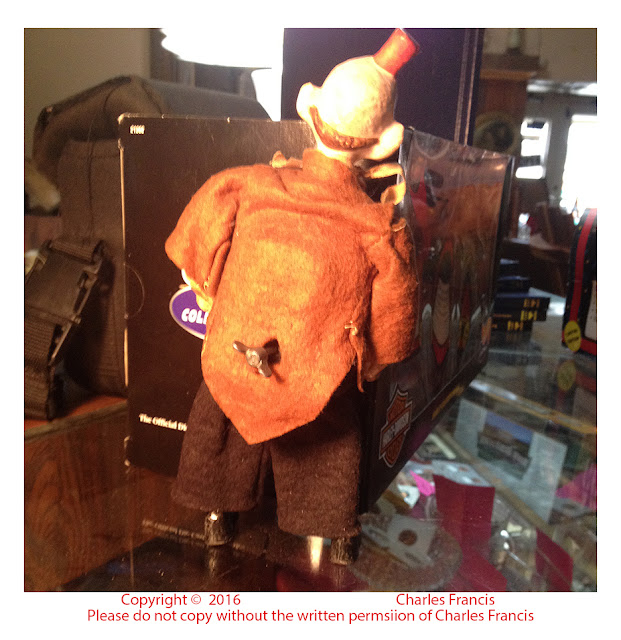 Today's post is short, but I hope that someone will be able to help Charles out.
The toy is 9-10"  ( 228 mm - 254 mm) high, has cast iron feet, and is a wind-up toy.
As well, Charles mentioned that the hands and head appear to be plastic-like.
Charles also mentioned that the toy resembles the character "Happy Hooligan", and he did see a similar toy  from about 1905.

The character was a comic strip character from 1900-1932 and the cartoonist was
Mr. Frederick Burr Opper who published under the Hearst newspaper chain.

Thanks for dropping by, and as always,
have a great part of the day or night,
wherever you may be.

Posted by toysearcher at 9:38 AM No comments: