A Reader Asks About a Tethered Car

A Reader Asks About
Her Tethered Car

From time-to-time, I receive letters from readers asking me about different things.  Last week
I received an e-mail from Rebecca Kirkland from the USA.  Rebecca has inherited a McCoy  tethered racer from her father. Rebecca remembered that when she was a young girl, she would accompany her father to the a park, where there would have been a place for her father to race his tethered racer.

Tethered racers race around a fenced-in circle. The reason they are called "tethered" is because they are attached by a steel wire attached to a pole in the middle of the racetrack,in order to keep  the car from driving off the track.

What is a tethered car?

"Tether cars look a lot like the vehicles that break land-speed records. The cars are narrow and most of the engine parts are enclosed inside the body of the racer. They're comprised of parts similar to a full-size car, including a combustion engine, exhaust pipe, air intake, flywheel, gears, driveshaft and wheels. The racers also have a tailskid, located in the back that stabilizes the vehicles at top speeds. The cars are typically about one to two feet (30.5 to 61 centimeters) long, and weigh anywhere from two to six pounds (0.9 to 2.7 kilograms).
In the international competitions, there are five different engine sizes that compete. The smallest is the 1.5 cubic centimeter (cc) engine, which has a top speed over 65 miles per hour (104.6 kilometers per hour). The other engine sizes are the 2.5cc, 3.5cc, 5cc and 10cc classes. The 10cc engine class cars are capable of producing speeds over 200 miles per hour (321.9 kilometers per hour) [source: Macropoulos]. These two-cylinder engines typically run on a fuel mixture of 80 percent methanol and 20 percent castor oil and are capable of producing engine speeds up to 45,000 revolutions per minute."*
https://auto.howstuffworks.com/auto-racing/motorsports/tether-car-racing1.htm*
Tethered cars were developed in the early 1930's. They were designed and made by amateur enthusiasts  who were usually machinists or engineers.  By the time that these cars got popular, many "racetracks" were made in the USA. WWII created an interruption for these racers, as the war effort required people to focus more on winning the war, and  metals became restrictive, as they had to be used to manufacture armaments such as bombers, tanks, and guns.

Standard tether cars were built to 1/6 or 1/8 scale. Engine size typically was .60 cubic inches, and
overall length was between 14 and 24 inches (35.5 cm - 61 cm). "Mite"cars were about half the size of standard models, and their lower price made them increasingly popular.

After WWII, the sport was not as popular compared to what it was in the 1930's.

Below are photos that Rebecca sent me of her father's car. It was manufactured by Dick McCoy, who was more-famous for manufacturing the small engines that were used to propel the cars.
Rebecca's tethered car is a vintage "Real McCoy" brand. It is one of the
more desirable tethered cars on the market. 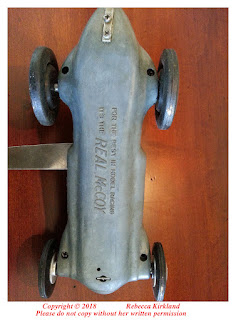 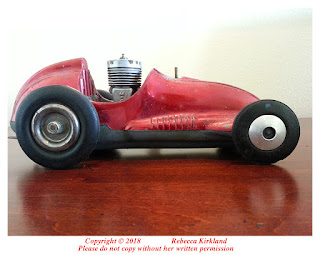 That flat metal piece attached to the car is where the steel wire
is attached to from the pole in the centre of the round track. 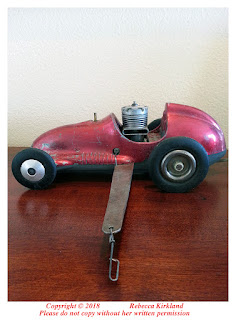 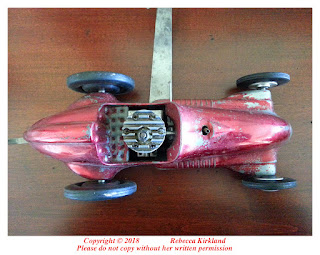 The reason that Rebecca had contacted me was to find out about where she should sell her car. Initially, Rebecca mentioned  Craig's list, but she had agreed that perhaps this was not the correct place to sell such a unique car. I did some research, and suggested ebay.

When I visited ebay,  I was surprised at how much people were asking for these nice collectibles.
Prices (frm high to low) ranged from $ 6000.00 - $ 160.00 US Dollars. Of course, the older and rarer the car, the more expensive it was. Also, some of the listing had cars that did not have engines.

So that's it for another day.
Thanks for dropping by,
and as always,
have a great part of the day or night,
Wherever you may be.

Posted by toysearcher at 7:37 AM 2 comments: