My article today has to do with the Hubley cast iron racer which was manufactured about 1906. I finally was able to purchase one for a good price. Currently (Late 2010 and first quarter of 2011) the toy market on E-Bay is terrible. For the more common toys, selling is "the pits". For higher-end items, there seems to be good responses.

Anyway, this is a really nice item to  have, although I'll be selling it on E-Bay. If someone out there knows for sure that this is the "real thing" please tell me. I know that some old cast iron toys have hammered rivets at both ends to keep the 2 halves of the toy together. This one has screws, and holes where the screws go.

What's nice about this is that it's similar to the other Hubley racer that I mentioned in another article. This one is more interesting, because you can open up both engine covers (is this still called a "hood?") to see the engine.

I'll let the photos illustrate the attraction that I have for this toy. 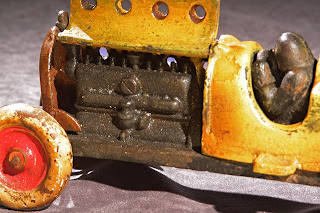 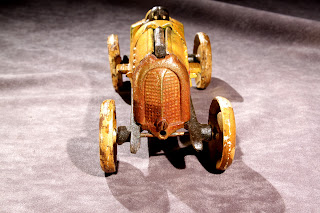 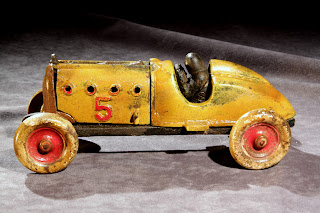 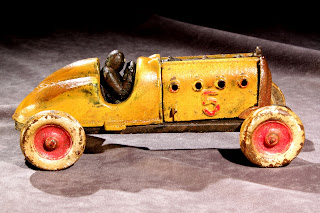 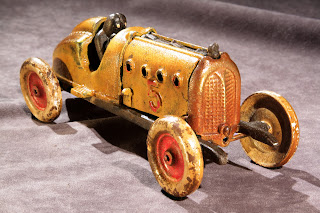 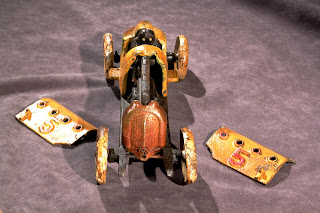 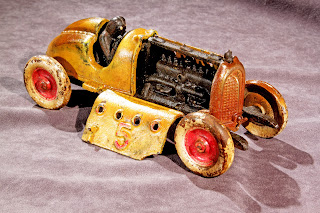 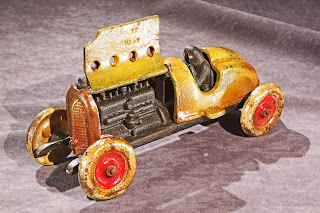 I usually forget to inform people of the size of the item that I am selling on e-Bay.
For your information the dimensions are:

Some of the Hubley Tractors and Bulldozers


The Hubley farm tractors and bulldozers are probably not as "collectable" as some of the other Hubley toys. However, having bought and sold them, I would like to guess that they certainly have been some of the more "played-with" toys.

Most of the times, the rubber tracks are missing or the blade holders on the side are broken. However, what I like the best is the "dirt" or farm soil that still is stuck on the machine body, the tracks, and the grooves of the wheels. I even tried to remove some dirt from a set of tractor wheels, and it seemed to be permanently stuck on. 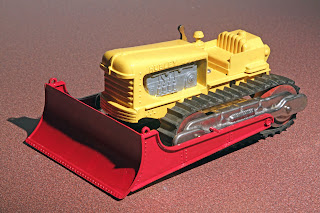 The above bulldozer was the first toy that I "restored"
You're not supposed to re-paint old toys and remove the rust, but I did, having figuring that I would make more doing so.
I didn't make much on the bulldozer above, but I was very happy that someone purchased it. They even said that I did a very good job! 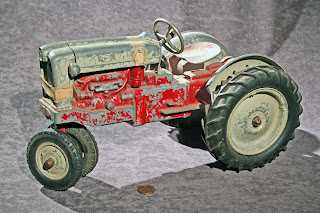 What I like about the Hubley tracotor is that the company remained "true" to that springy seat. 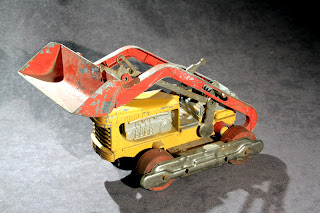 Another characteristic that I like about the tractors and bulldozers is the raised detail on the engine, as well as the detail on the silver-sided glides for the tracks. 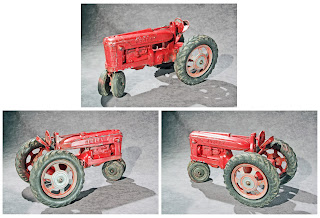 You can especially see how much "spring" there is in this seat due to how high the seat is elevated.
Notice the dirt that is still stuck to the tires. I tired to remove this with my dental Water-Pic, but didn;t get much results. 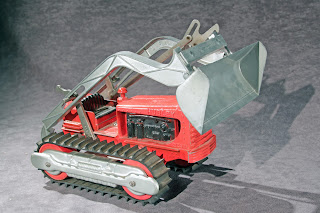 This bulldozer was the last one that I purchased for this article and will re-sell.
It's in great shape for being about 50 years old.
I like to guess and think about how a toy so old had remained in such good shape.

Posted by toysearcher at 1:58 PM 3 comments:


Sometimes you are fortunate enough to meet someone on the Internet who is exceptional. In my case, his name is Allen Paulsen. I was trying to re-sell a toy on E-Bay, that I had bought, but was not having much luck. I received an e-mail from Allen offering me an amount to buy the toy. He said that he was interested in restoring the toy. Naturally, with sales being slow lately on E-Bay, I gladly sold him the toy.

I made 1 request to Allen, asking if he would send me the finished images of the Wyandotte that he was restoring. He did send the photos, but they were sent to my E-Bay mailing address, that I don't read very much. So yesterday, I get an e-mail asking if I saw his photos. I hadn't, and I asked him to resend them.

Lo and behold, they arrive faster than I had had a chance to reply! The restoration of the old Wyandotte was a "masterpiece". So below are the before and after images of this toy. 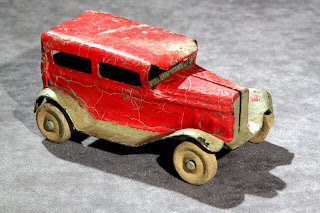 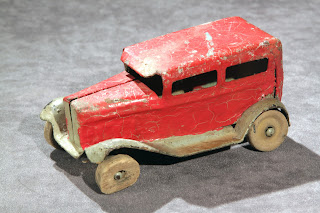 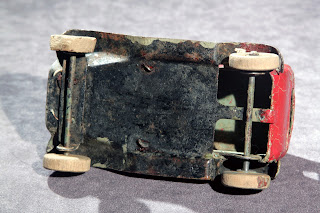 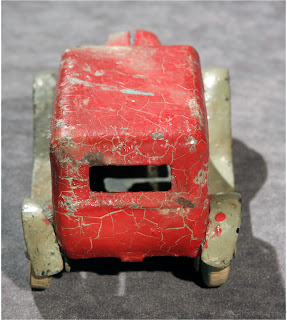 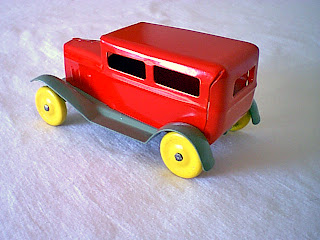 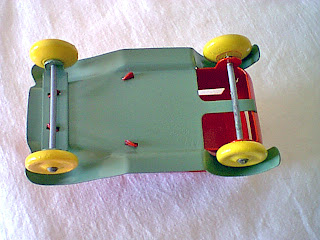 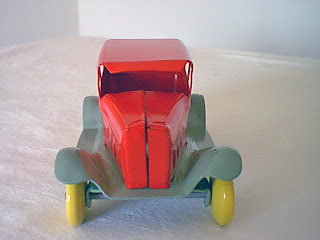 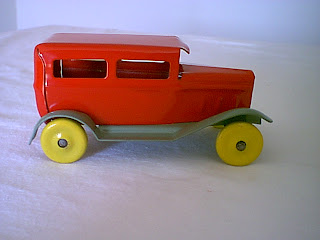 Unbelievable!  The restoration looks like the toy had just come off the assembly line!

I asked Allen to send me information as to how he did the restoration, and when I receive the info, I'll gladly share it with everyone.


Posted by toysearcher at 6:28 AM No comments: