It's always great to receive e-mail from readers, and  it was no exception to receive some  new information about very old trains.

In John Goulet's Own Words

I got a Lionel set the next year- 621 switcher and a couple more sets later on.

Was a big fan of the Lionel Model Railroading paperbacks from Bantam publishing.  All those black and white photos of the showroom layouts as well as the Rochester PAL layouts!!

In the early 80s I got a home in Maine and got all the trains out and a layout in the basement.  Several years went by and I ran into the TM book  Great Toy Train Layouts and was hooked.  A 2 car garage got a gambrel roof and layout room.  I have had that layout since (about 24 x 22). Moved it all to Massachusetts in 1993 where I am today.

I got a piece of Lionel 2 7/8 gauge from a friend in Downeast Maine around 1995. A  #100 B&O.  That was and is remarkable.  Runs like a Swiss watch!! Very well made. Over the next 20+ years I got two more pieces, a #300 Converse Trolley and a #100 steel gondola.  I put up a 5x10 foot layout in the center of the train room as trains cannot sit - they gotta operate!!!  It has all original steel band track with wooden ties. A challenge but it works.  Can appreciate why Lionel went to tubular 3 rail around 1906."


Converse provided trolley floor toys to Lionel in 1901.  Lionel in turn removed the


wheel assemblies and put the trolley body on top of their  own electrically driven
chassis.  (many pix available).  The Converse floor toys were #702.  The resulting Lionel
trolley was their #300.


In 1901 Converse was perhaps  the worlds largest toy manufacturer. Lionel was 2 guys in a loft in New York City with some ideas and a lot of enthusiasm.
In 1901, people used wet cell batteries!!!!  Transformers were 10 + years in the future. I use a much later transformer with a full wave rectifier on it to provide DC current."

I remember going to the last The Lone Ranger movie
(with Armie Hammer and Johnny Depp - 2013)
and there was a train set in the movie.
The movie took place in the 1880's, so I was wondering how the small train was powered.
And now I know - it was with wet cell batteries. 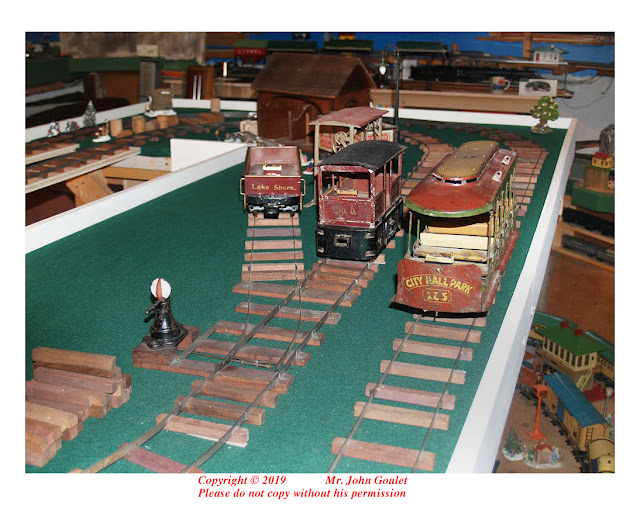 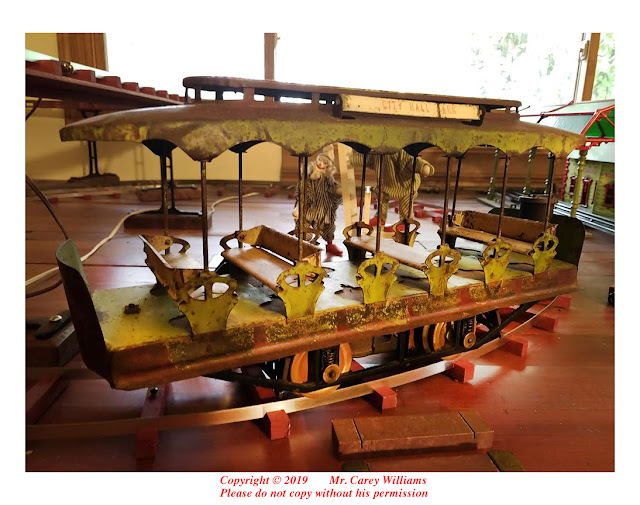 The image below is superbly photographed to illustrate
the small motor and the electrical wires. 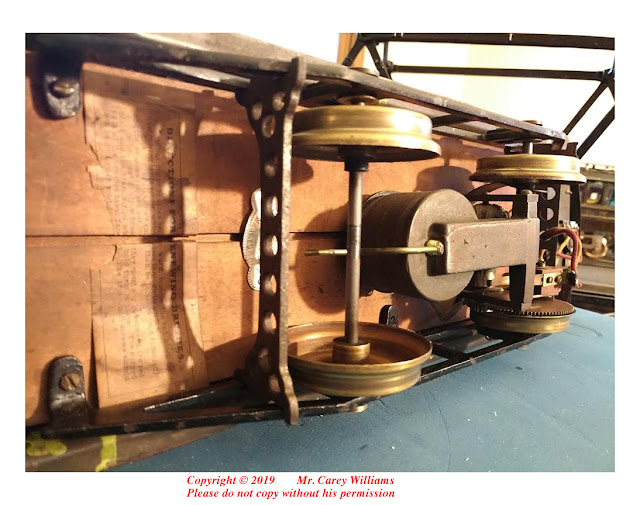 A nice image by John Goulet
illustrating another fine car. 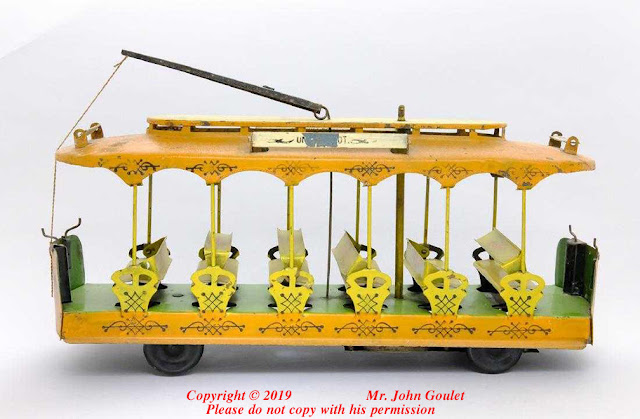 This is the first post for 2019. I want to wish everyone (belatedly) a healthy and Happy New Year.
Also, everyone and anyone are welcome to write to me with their toy photos and narrative.
I'm always interested to read what people have to say, and read their stories as to how they acquired their toys.

As always,
Have a great day or evening
Wherever you may be.

Posted by toysearcher at 7:17 AM No comments: