The Meier toy company was located in Nuremberg in the 1880's and later. It produced lithographed tin toys. The parts of these toys were cut and the pieces would be sent to people (usually unskilled) to assemble in their homes. The pieces were usually mirrored images of each other., and had small tabs that would be fitted into small slots. The toys were very popular and the major market was Great Britain. Most of these topes are called "Penny Toys". They were inexpensive to make, and were sold wholesale to importers who would then sell them to street "merchants" who would sell them for a penny. Even at these low prices, there were profits to be made by these venders.

The Penny Toys were popular from the 1880's  to 1914 , the start of WWI. Many of these toys were mobile with the toy on a rolling platform with 4 wheels. On some toys, the head of an animal would move. The identification of the Meier toys appears to have the words or name of "Ges. Gesch" 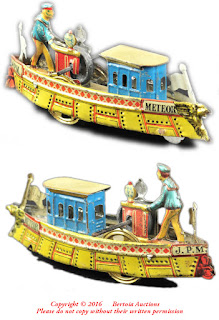 The toy above is more complicated, and appears to have a flywheel mechanism. 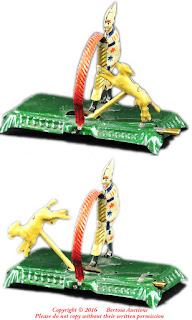 This toy had a small lever at the back of the toy. When pushed into the toy,
the dog jumps through a hoop. This toy doesn't have a set of wheels.

There are 2 toys in this post that have small lids that can be opened from the top.
The small container was for candies to be placed. 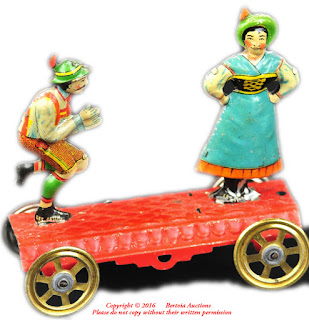 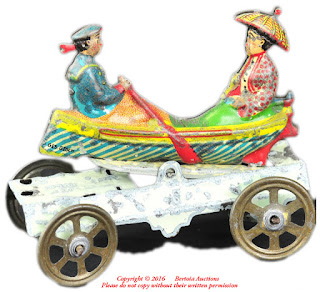 In the toy above, the boat is held in place by a rod through the bottom. As the toy is
moved on the floor, or is pulled by a cord, the boat will rock back and forth. 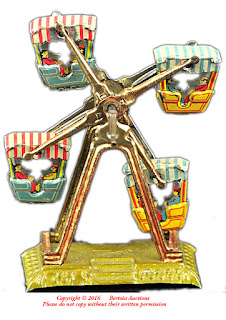 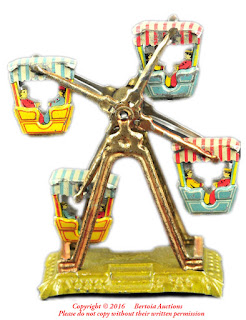 This Ferris wheel rotates in a full circle.  The two halves of people do not attach together.
As such, the inner halves are not lithographed, but are exposed tin. 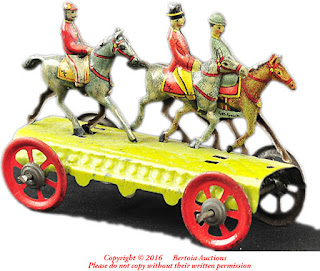 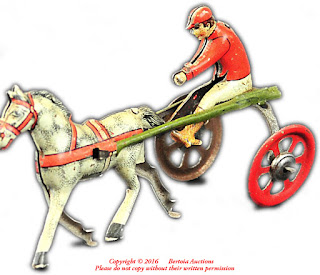 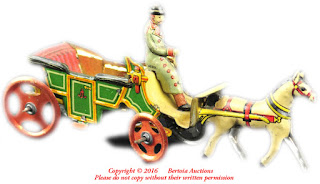 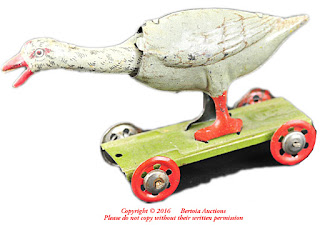 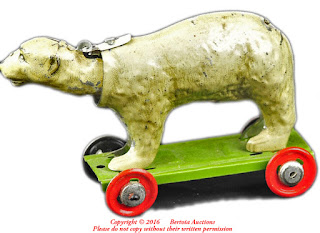 The toys immediately above have moveable heads. As the toy is pulled or
pushed on the ground, the head "bobs" up and down. You can see a small hole at the front
of the green platform, where a cord would be tied through the hole. 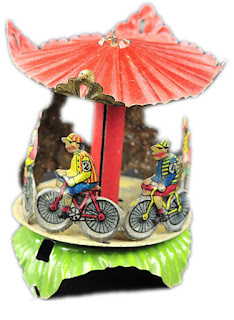 You can see in the toy above that the inner sides of the cyclists was not painted.
Rust has oxidized the inner surfaces. 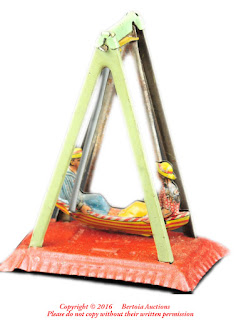 It's very interesting that the Meier company and several other companies made so many different designs  of their toys. But I assume that even by selling toys by hundreds at a time of one kind, not only did the Meier company make money, but so did the street venders.

As far as the size of these toys go, they were small, ranging in size from 2" - 4" in length.
More surprisingly is what these toys sell for today.  The prices can range from $ 200.00 American (sometimes lower) up to $ 100.00 USD. This is certainly "not bad" for a toy that once sold for a penny!

Posted by toysearcher at 7:34 AM