Lately, I've been seeing a fair amount of restored toys on ebay. I always though that "restored" toys go for less money than restored toys. However, the sellers whose toys I've been seeing are asking a fair amount of money for these toys. There is a "classification" hierarchy for toy restorations. There is the higher-valued one from which the toy was "professionally" restored, and there is the restoration that was done by someone who owned the toy at some time in its history. The latter classification may go for less money for the asking price, assuming that the toys are identical in the type of toy, and the name brand.

If you visit each of these fine ebay sellers, you will see the actual prices that they are asking for their toys. However, as you can see, these are two totally different toys. One thing that might interest you is the ice. Ice used to be cut from rivers and stored in large warehouses that were protected from the sun. The ice would last all year long, until the next season, when ice would again be cut from rivers.
THe ice would be delivered by horse and wagon, then by a vehicular wagon to homes that would have an "icebox". The icebox was where you put the ice so that the food would stay fresh.

I can personally vouch for ice that lasted a long time in storage, because I once went rising at a place called Dorval Lodge in a wildlife refuge called La Verendrye Park here in Quebec. A huge man-made lake was made in the park from a dam  for hydro-electricity that was constructed in the 1940's.

I caught pike and walleye the first day, and when  the guide dropped them off in an old large supply building, I went to see where the first would be after they were gutted. Sure enough, there was no refrigeration or freezers, but there was ice. The ice had sawdust on it that must have acted to preserve the could and insulate the ice from heat. And this was in August! This ice was cut from the lake in winter, and managed to stay all winter and summer.
That was a truly amazing discovery for me! 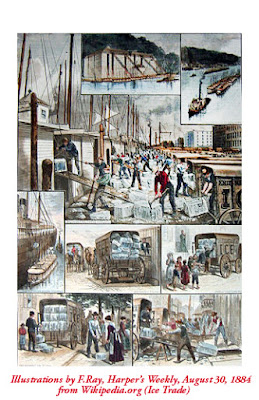 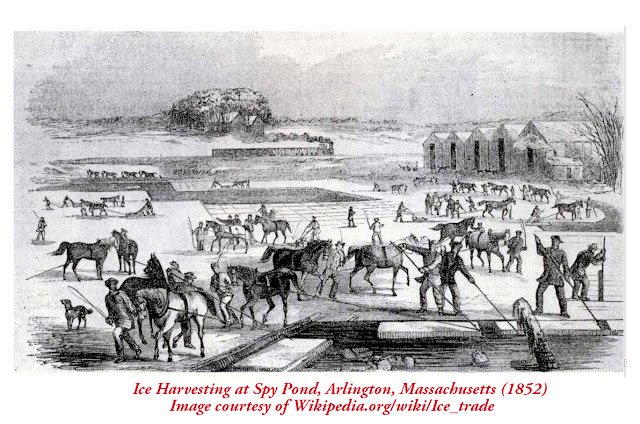 What was also interesting is another story. I came up by bus to Dorval Lodge, and the trip lasted 3 hours. I accidentally left some of my fishing rods on the bus. 5 days later, when I get on the bus to go back to Montreal where I live, I see the same bus driver, and he hands me the fishing rods.
Another amazing story for an 18019 year old to experience.

Personally, I like most of the toys I write about because they are usually very old, but have survived over time.  But I especially like these old toys. They were modelled on the trucks of the day, and they are also BIG! These toys must have certainly fun for children to play with. However, not all children could have them. These toys cost a good amount of money compared to other toys, and not all parents coil;d afford to pay a week's salary for a toy for their children.

Sometimes, I like to remove the colour in the background of a toy. In this way,
the black and white that remains does not distract from the coloured toy. I work with Photoshop if you're wondering what software that I use. 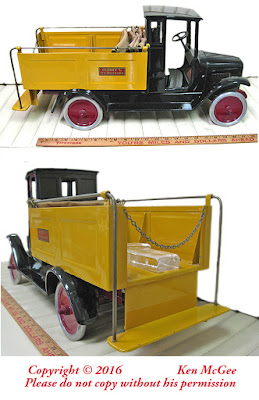