"The toy manufacturer Bub was founded by Karl Bub in Nuremberg, in 1851, and produced a variety of static and clockwork tin toys, but came to prominence with the metal cars and trains that they produced from around 1905 onwards. Bub and Tipp & Co (Nuremberg) opened a factory in Aylebury after WW1 to bypass UK anti-German import restrictions, until 1939 when WW2 broke out. Bub's solid locomotives were in demand between the wars, and the company bought Bing's manufacturing base in 1932, after that company went bankrupt. Bub's Nuremberg factory had to be rebuilt after WW2. The company supported a range of smaller train formats, but its emphasis on promoting its S-gaugetrains rather than the more popular 00-gauge and HO-gauge formats impacted on its market share, and the company closed in 1966."*
Citation:  http://www.brightontoymuseum.co.uk/index/Category:Karl_Bub

The 1910's automobiles were more sophisticated in parts than the later 1930's automobiles. The earlier cars had glass windows, opening doors, spoked wheels, and some even had nickel-plated headlights. By the time of the 1930's (see the last car at the bottom), the car has solid lithographed wheels (tires). It does have however, battery-operated headlights. The cars were mostly clockwork-driven . 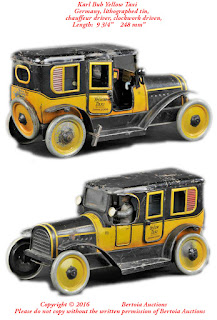 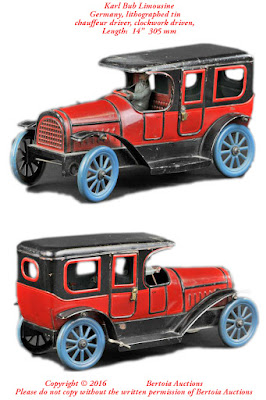 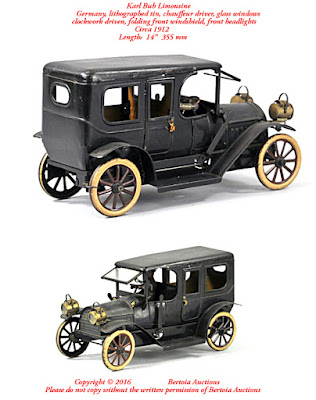 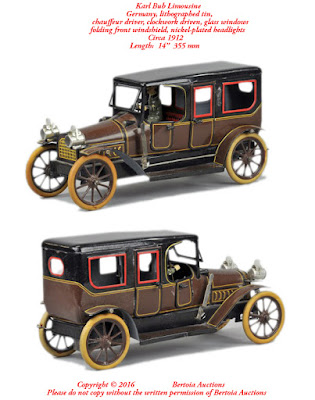 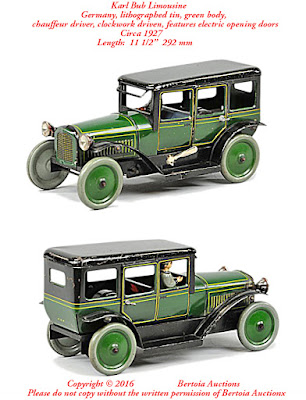 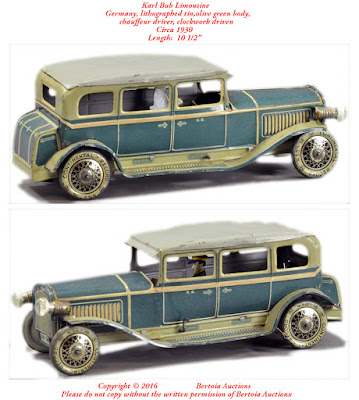 The older Bub automobiles do well at auctions and are in high demand.
It's trull;y amazing how good their condition is considering their age.

Posted by toysearcher at 8:12 AM