A Fine Grouping of Toy Motorcycles


A Fine Grouping of Motorcycles 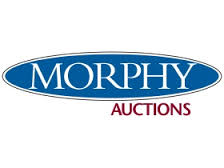 When I visited Wikipedia to find out about the history of  motorcycles, I was very surprised to find out that the first motorcycle was invented in the 1860's by Mr. Pierre Michaux in Paris, France.  His invention was simple in that he took a velocipede (bicycle with pedals) and attached a  steam engine to it.  By the 1880's there were dozens of motorized machine, and eventually, the designs migrated to the United States. By the early 1900's there were many "motorcycles". The famous Harley-Davidson company  started to produce motorcycles in 1903. When WWI started, the motorcycles built many motorcycles for the War Effort, booth in Germany, and in England and France.*

I didn't add any information about the toy motorcycles.  I thought that I'd just present them for your enjoyment. I would be hard pressed to figure out which manufacturer made which toy, but suffice to say that many of the companies of the time made toy motorcycles.  You have to realize that even with the invention of the automobile, there were not many paved or developed roads both in Europe and in North America. This was especially true in the countryside. As such, it was much easier to get around the country and countryside by using a motorcycle. The motorcycle could go to places and through landscapes coverers with trees much easier than the automobile. Also, it was easier for the rider to get the vehicle out of being stuck in mud than it was the automobile.

If you want an excellent book about motorcycles, there is one having been written by Rick Bertoia titled Antique Motorcycle Toys.

Most of the toys below are lithographed tin toys. Some of the toys had identical "mirror image" sides so that the  left and right sides could be assembled together. Most of the toys move with a push, but some of them were wind-ups. 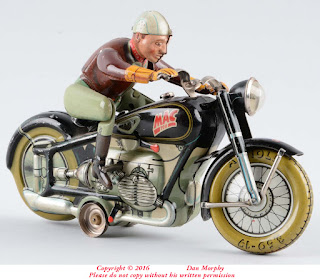 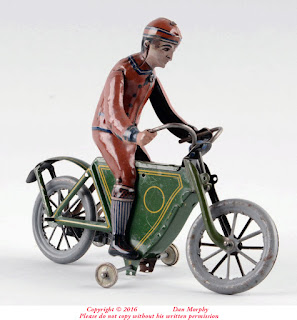 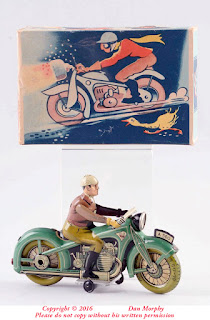 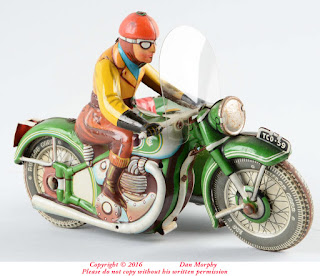 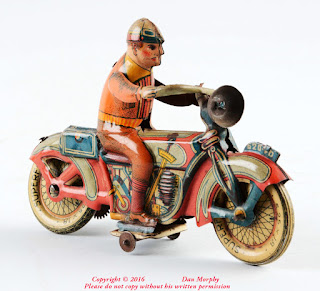 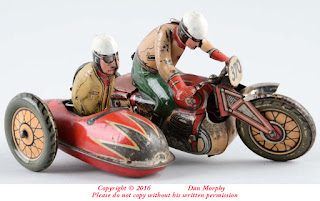 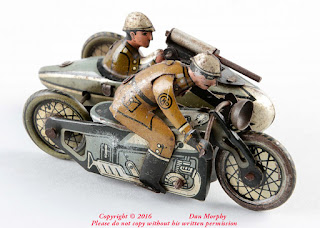 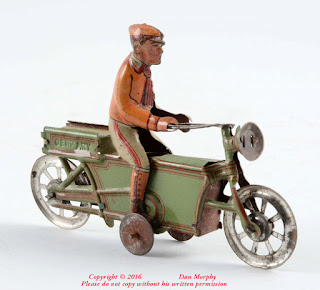 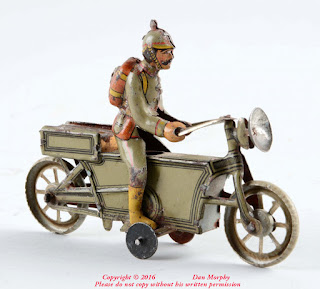 Thanks for dropping by,
and as always,
Have a great part of the day,
wherever you may be.