Cast iron toys were more of a "phenomena" in the USA than anywhere else in the world, although there were some made in Sweden. Most of the American  cast iron tout manufacturers were originally hardware manufacturers. This means that they manufactured household items for the house. Examples were doorstops, locks, keys, and door handles. Most American manufacturers located in Pennsylvania  due to the abundance of coal for powering the furnaces necessary to cast the toys. Sand molds would be made from  sand. Before the shape was embedded in the sand, a wooden form was carved from wood for the 2 sides of the mold (left and right). The wood forms would then be pressed hard into sand to create the mild. From there, molten cast iron would be poured into the sand mood and allowed to cool.  When the mild was cool enough, the toy halves were removed from the sand. Any excess iron from the pouring would be cut or hammered away, and the toy would then be buffed on a sander to smooth the form. Later on, the toy would be painted, and the other parts (e.g. car axles, metal wheels, or wooden hubs with rubber tires) would then be attached to the car.

Most of the cast iron toys made in the USA were made between the late 1800's until the 1930's.
By then, die-cast toys, pressed steel toys, and lithographed tin toys replaced the cast iron toys. THese other toys were easier to manufacturer with the newer technology necessary to manufacturer toys. As well, the increased cost of shipping toys by rail during the 1930's and later necessitated making toys that weighted less than the previous cast iron toys. As well, more complicated toys such as wind-up toys could be made. 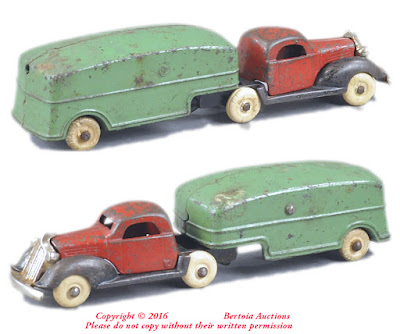 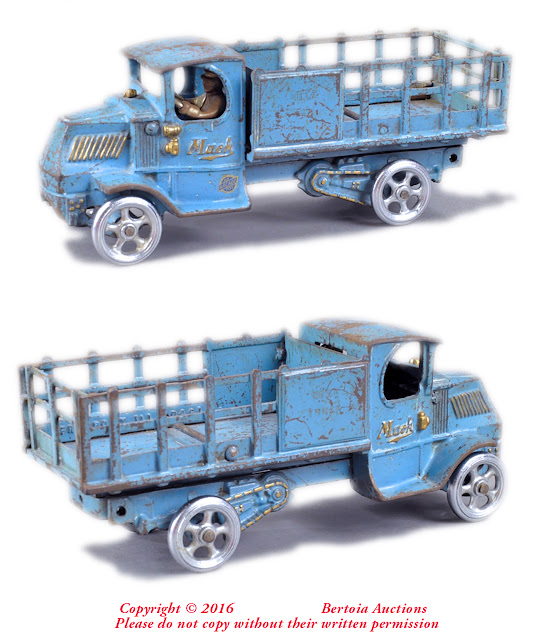 Cast iron toys are still in demand by collectors. The topmost toy (the motorcycle) made by Hubley was one of at least 18 different models that Hubley made. THere were lots of "real" motorcycles on the roads from 1900-1930, and naturally children wanted toys made to look like the "real thing".  Early cast iron toys (1880's-1920's) were naturally made to resemble moving wagons and carts that were pulled by horses. Later on, from the 1910's-1930's the toys were  made in the form of automobile, trucks, and even airplanes.  Interestingly, the horse-pulled wagons and carts were still being made, even as motorized vehicles were starting to get more and more popular.

So that's it for today.
Thanks for visiting,
and have a great part of the day or night,
wherever you may be.