A Brief history of the Japanese Toy Industry

Japan was in dire straits when WWII ended. The Marshall plan was initiated to help Japan get of the terrible state that it was in at this time. There were food shortages, and their industries for the most part had been decimated from the constant bombings that the Americans had done as a precursor for the invasion of Japan. However, with the dropping of the 2 atomic bombs, the war ended and the invasion was not needed.

The Marshall plan was initiated in order to help Japan recover from the effects of WWII. Food was in short supply, and the country had to be rebuilt. One of the purposes of the Marshall plan was to help with the reconstruction, and to bring in much need money. As such,  some industries were designated as "export industries" during the mid-1940-s-1950's in order to bring in foreign cash (e.g. US Dollars) for the purchase of food and other supplies that were needed.

I remember in the 1950's when "Made in Japan" was a derogatory term for poor quality and "cheapness". However,  Japan worked very hard to manufacture excellent-quality products, and by the mid-1960's became a major exporter around the world, and known for the manufacturer of excellent products with excellent quality control.

" Smith House was founded in 1986 by Herb & Barb Smith. They were one of the first to do a catalog/phone format auction. I was a long time buyer/consignor to them. I purchased the business from them in 2004 when they retired. I do 2 auctions a year handling only toys and toy related items. Bidding is done these days mostly on our website although we do still have quite a few phone bidders.

I would suggest you sign up for the email list to get notices about upcoming auctions. We also have a Facebook site that I recently started. I just posted a photo yesterday on the Facebook site of an incredibly rare airplane that will be in our spring auction. There was a 3 page article in a recent Antique Toy World magazine about the toy. The example I'll be selling has the original box."

The photo of the extremely rare toy mentioned in Mr. Craig Thompson's letter to me. 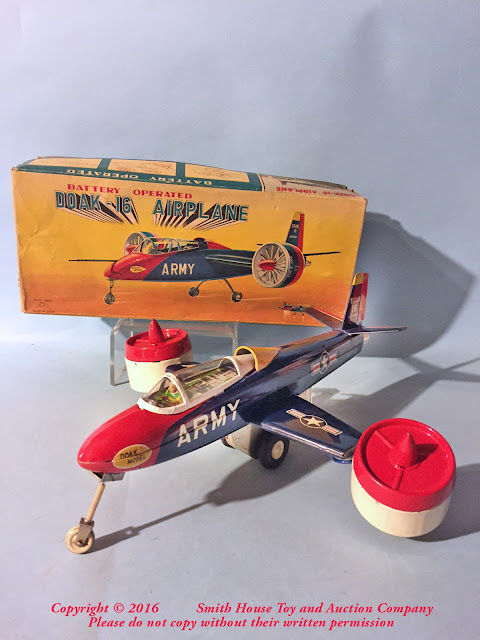 Craig's second e-mail to me:

"Thanks for the email. I sell more Japanese toys than anything else so I guess you can say I specialize in them. Depends on what comes in and what I find. I've sold quite a bit of American tin as well as European tin over the years as well. As far as what I find it's a result of years of 35+ years of being in the business in some way. I have quite a few connections and friends in the hobby in many parts of the world. I think the results I get are also an attraction for potential consignors. If you take a look at the past auction results on the website you'll get an idea. As far as condition I'm pretty picky on what I accept and purchase."

If you look at the toys that I have selected, you will notice that they mostly are in very good
condition. Also, if you visit the website, you will also notice that many of the toys come with their original boxes. When people buy toys for their children, the boxes are often thrown out.However, for collectors, the box is very important, and even increases the value of the collectible. 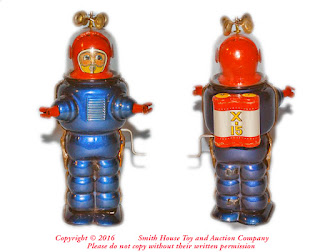 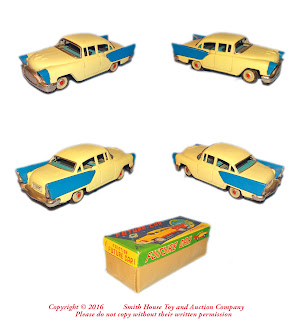 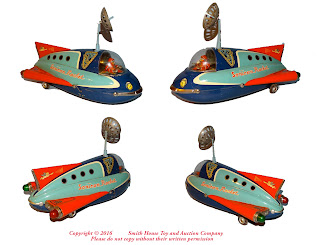 Space Elephant
Manufacturer: Yoshiya
WInd-up mechanism
Ears and tusks and trunk move and a spark shows in the window of his back.
Length: 8"  203 mm 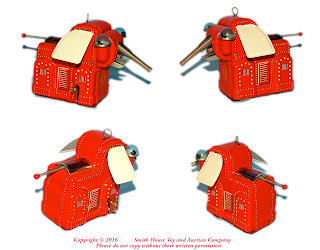 Chime Trooper
Manufacturer: Aoshin
Rare toy, mechanical wind-up mechanism
Advances as he plays a "plinking" musical sound.
He stops, and then heads off in a different direction.
Length:  9 1/4"  235 mm 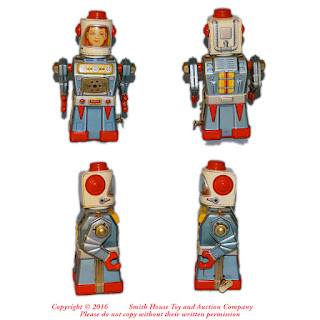 Space Gun
Manufacture: Daiya
LIthographed tin.
When the trigger is pulled, a firing noise is made.
Length:  7 1/2"  190 mm 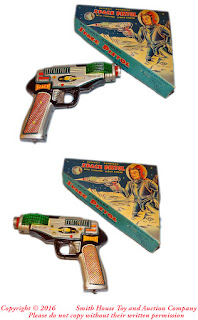 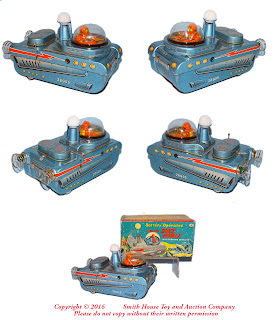 Posted by toysearcher at 6:51 AM