If you look hard enough, it's amazing how many discoveries are yet to be found in the old and antique toy world! Yesterday morning, I went to LiveAuctioneers to see what I might find, and what I found was another "Eureka" moment. I discovered the Karl Bud (Germany) line of toys. I've had a few large-sized pressed steel toys similar to these made in the USA, but never did I see the detail and the many different models of "automobiles".  I put automobiles in quotation marks, because  there are toy cars and there are "toy automobiles". Considering the era (1020's-1930's), a time in the world when economies were tanking,  millions of people were unemployed,and the world was about to enter a war within the decade, it's a wonder that toy companies made toys at all.

I started to screen-capture images with my great program called Snag-It, and I captured and captured, and decided to stop at 17! I"m getting faster and faster at presenting the images the way that I want to, but it still takes time. So 17 is a large number. However, the total number that Bertoia Auctions had on their site was somewhere near 55. I'm sure there are a few duplicates, but nevertheless, the many different models are outstanding.

The original company was Carrette & Co (Carette & Cie) - a French company. Carrette was established in 1886, by Mr. George Carrette, and  closed in 1917. It was acquired by Karl Bub. Karl Bub produced other toys such as trains, but his  automobile toys remain the  beacon by which the name remains.  There is an exceptional website for toy histories that you might want to visit for information:   www.powerhousemuseum.com 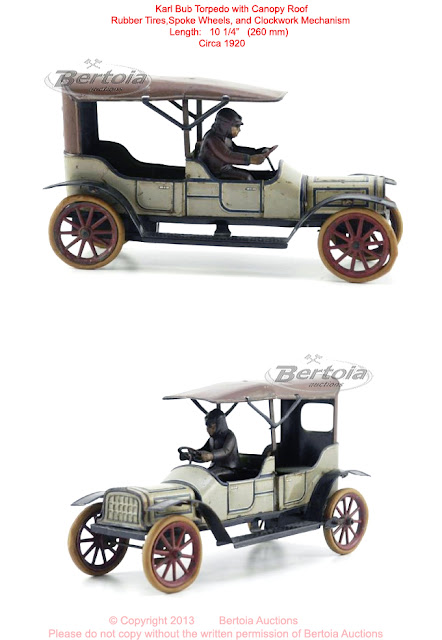 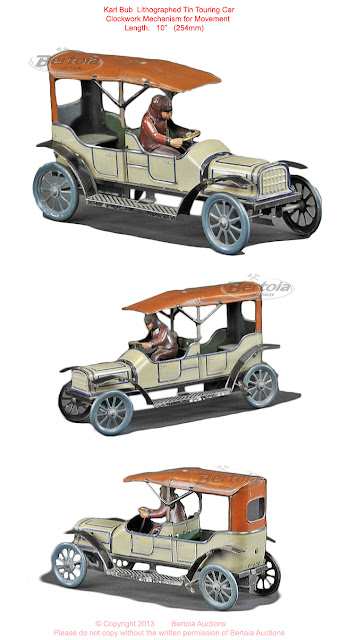 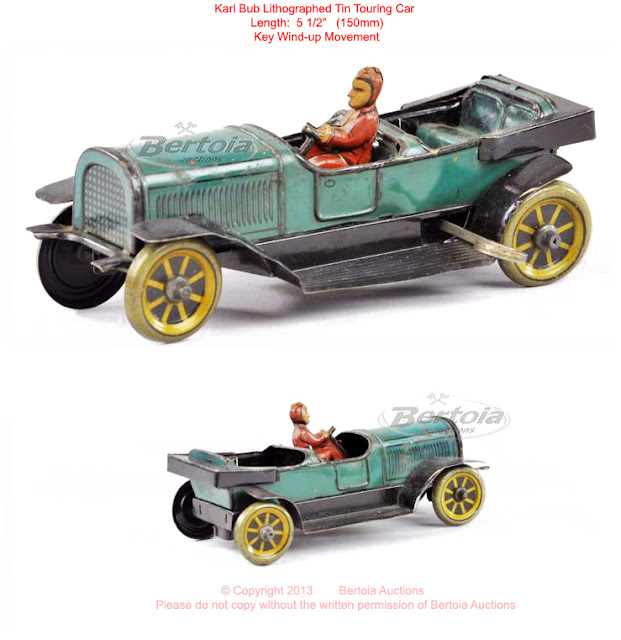 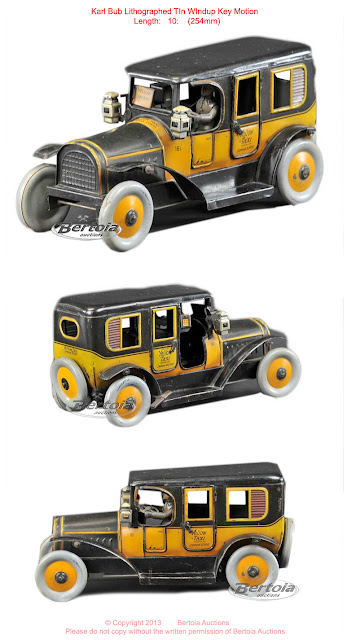 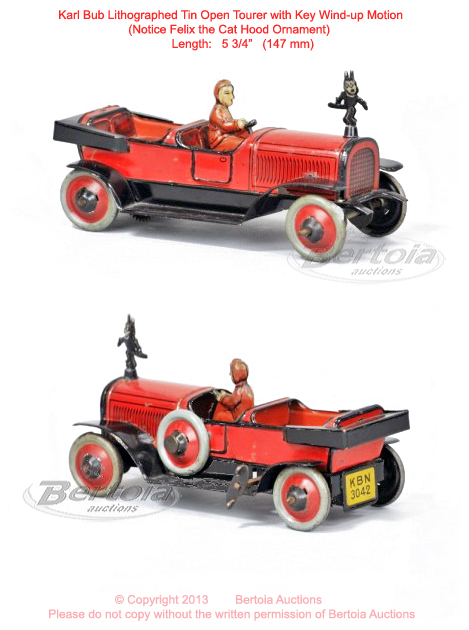 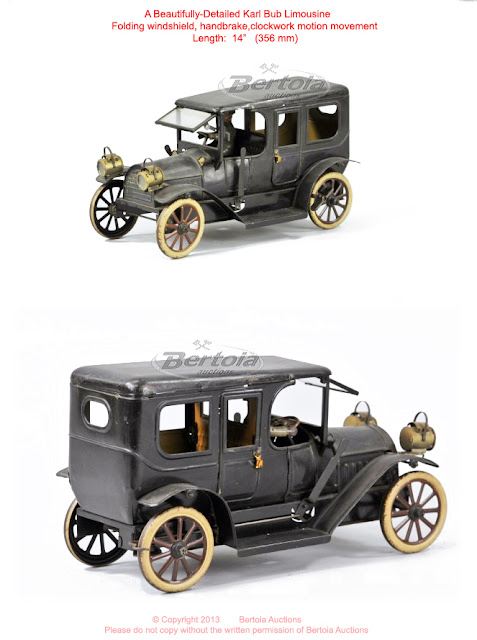 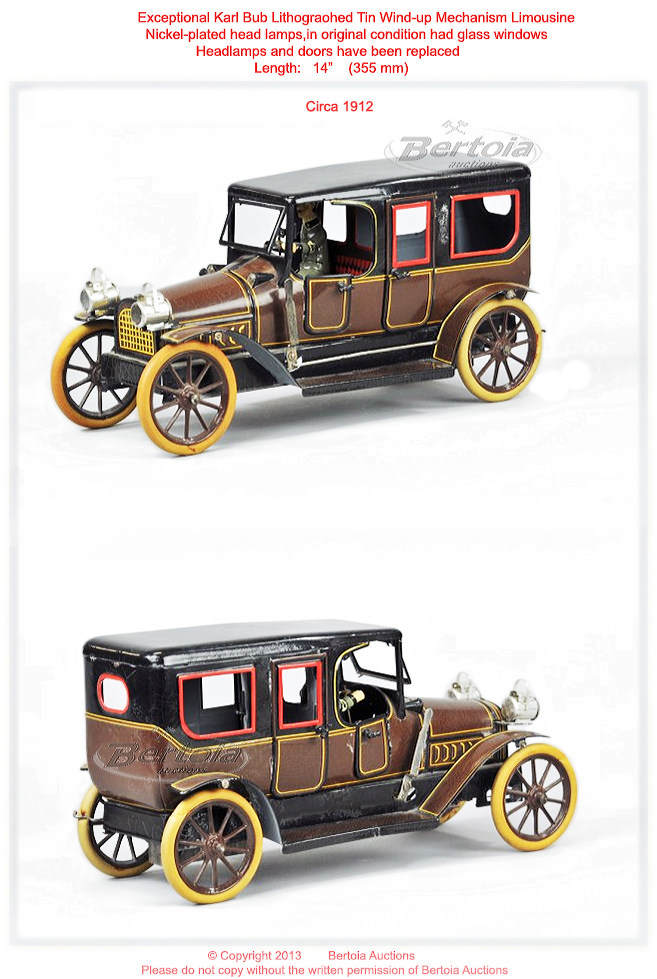 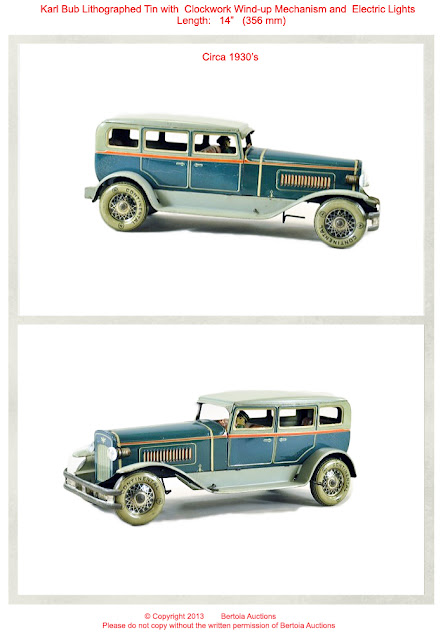 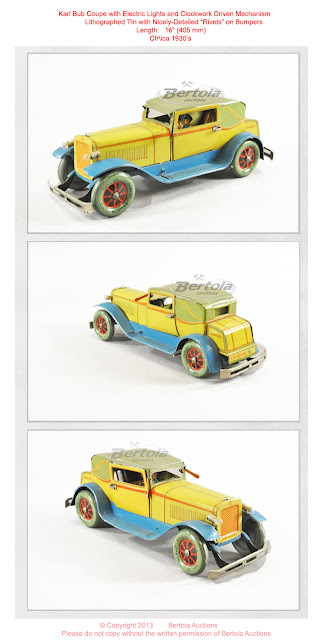 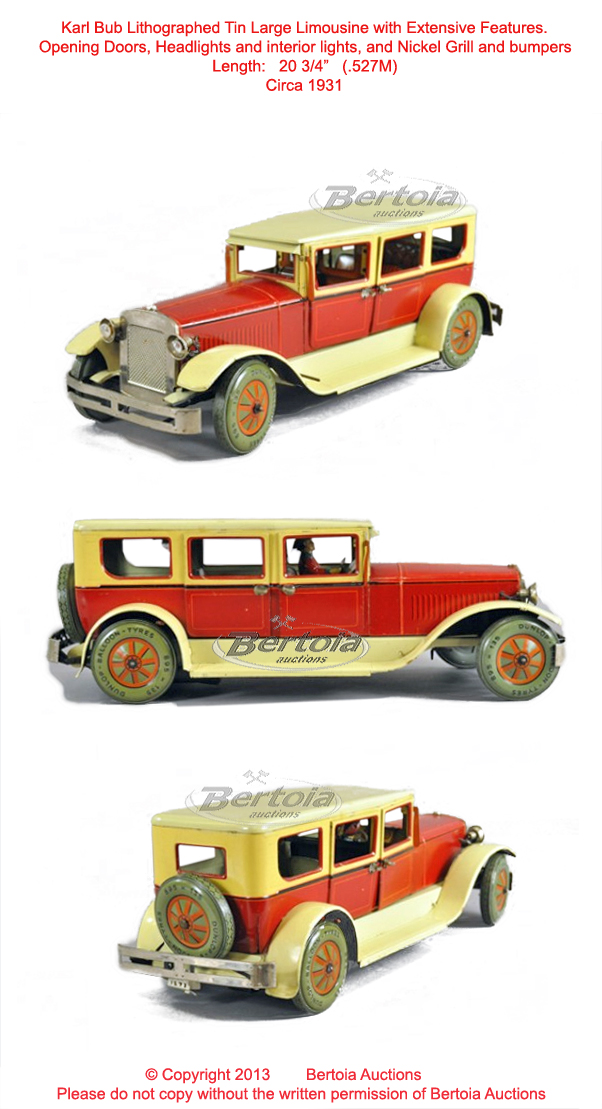 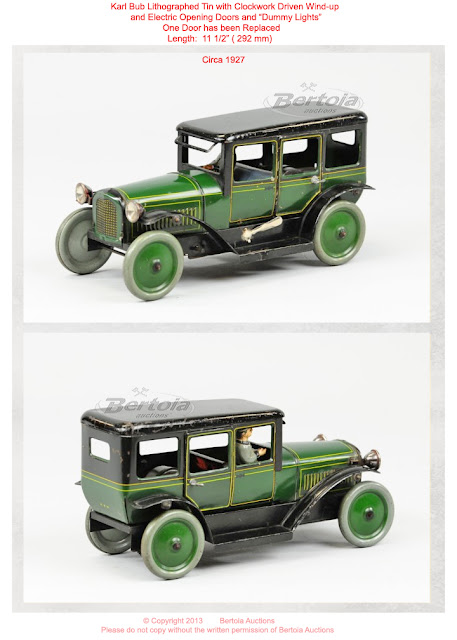 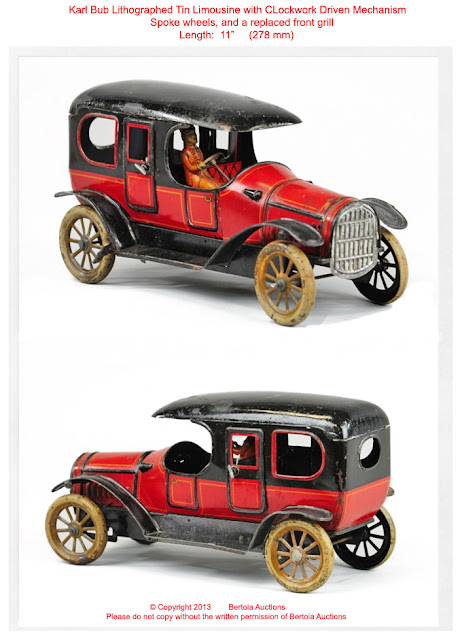 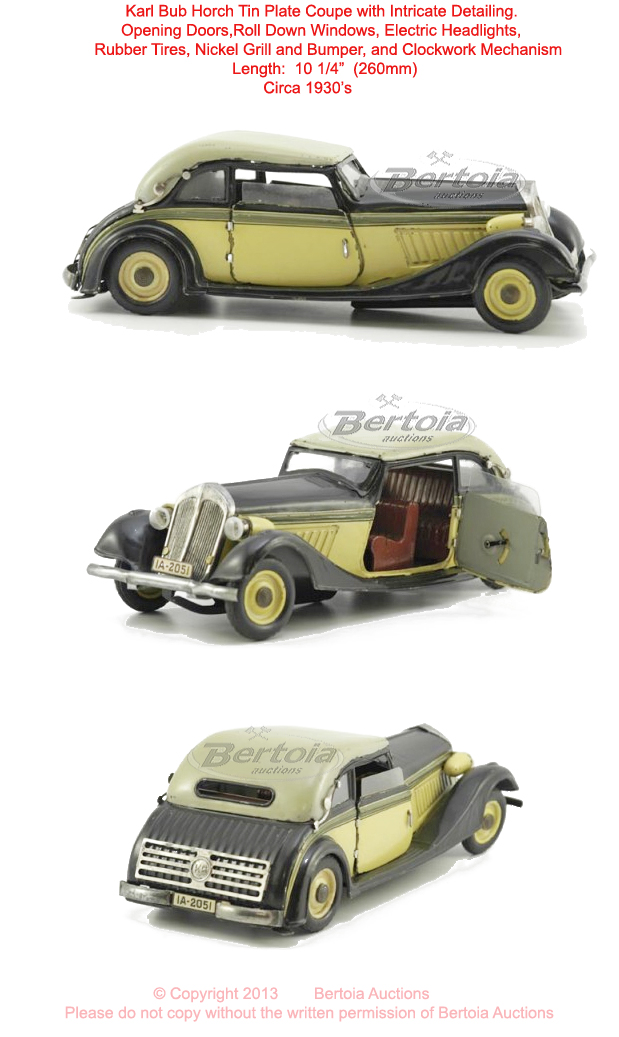 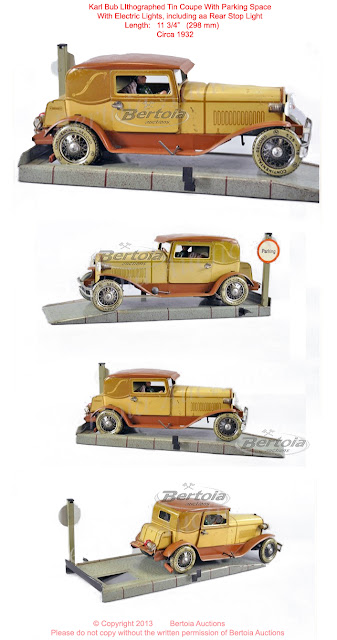 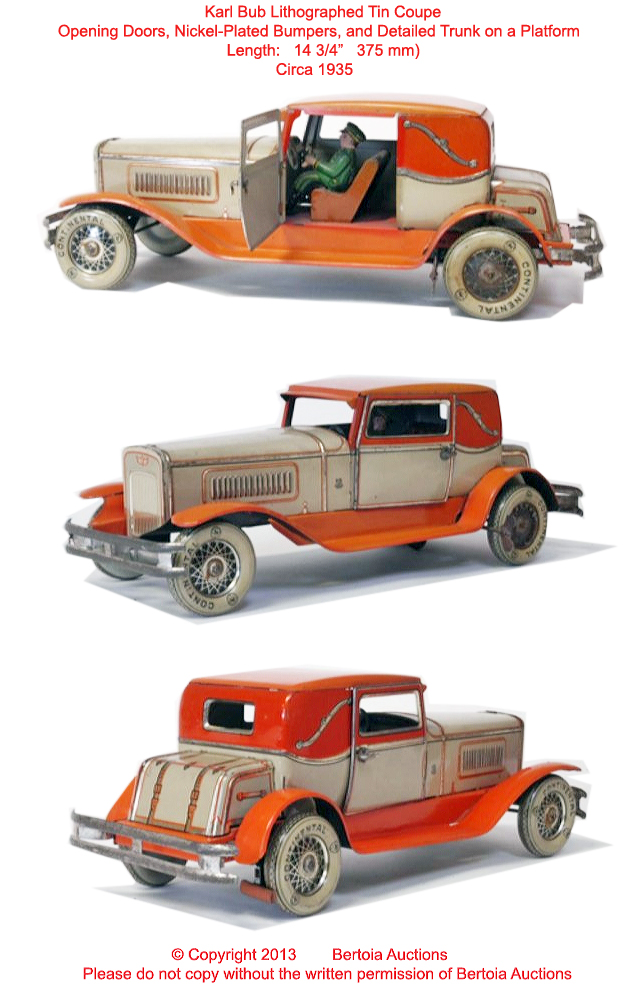 If you study the Karl Bud cars long enough you'll be able to know what the characteristics are that identify this particular brand.

1. Opening doors,
2. Nickel-plated bumpers and grills
3. Early model spoked-wheels
4. Rounded and folded metal parts
5. Fine lithographed printing and detailing such as around doors,
the car sides, the air vents, and so forth
6. The rounded lithographed metal tires

Of course, if you study these long enough, you'll find another 6 more features to help you identity these outstanding models. The question though is whether you'll ever find one in some barn somewhere for a really great price! Everyone nowadays is watching the British Road Show or the American version, as well as the various antique seekers on TV.

But you never know!

Thanks for visiting,
and have a great day wherever you may be reading this.

Posted by toysearcher at 1:45 AM