I had mentioned that I would return to Bonhams to write moire about their listings of lead soldiers. I'm still searching to match up divisions and oil paintings, but it's not that easy. So instead, for today, I decided to write about specialized groups that moved cannon and supplies with the aid of horses. I did a cursory search on Wikipedia,  and  just   in WWI, Britain and her allies used close to
1, 200,000 horses. It's hard to even imagine how many of these fine animals died in all of the wars over the course of history!

There's an expression that I'm paraphrasing says "an army travels on its stomach". So when you think of the vast armies and fighting through the last 300 years just in Europe, you have to imagine the logistics of all of the supplies, ammunition, spare parts, and of course food, just to move with the armies.

http://www.bonhams.com
(PLease press on the above address to be redirected to Bonhams website) 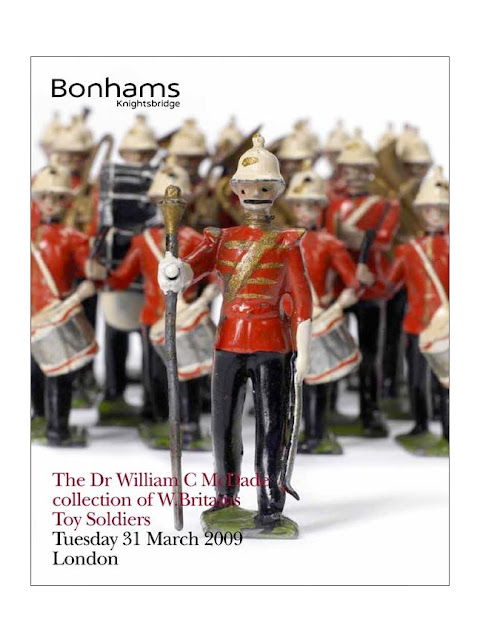 It's always great when an entire collection is up for auction. The reason that I say this is that you are able to actually see all of the different items at one time.Personally, this =saves me lots of time when writing s blog. More so though, it allows the reader to see how a company made its' toys and how their a a common set of characteristics that makes 1 toy company's toys different form the rest.

What's interestin g baou the above listing is the fact t hat the cannon is incorrect for the soldiers of the period. I believe the cannon is a Howitzer, and that cannon was developed and invented much later in history. Bohmans listed the listing with that particular notation. 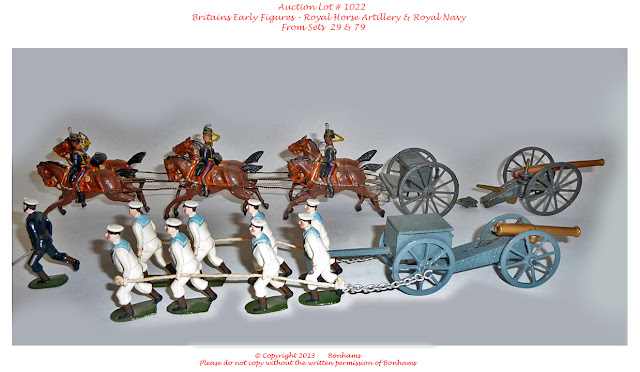 Not just horses were used. In Northern Africa in the desert climates, there were the camels,  and mules were used for their ability to carry heavy loads. I assume that the above set is accurate, however the middle mule with that rear part of the cannon looks disproportionate to the load. I'm sure it's corrct, but that poor mule, and the one behind it certainly were overburdened with their loads! 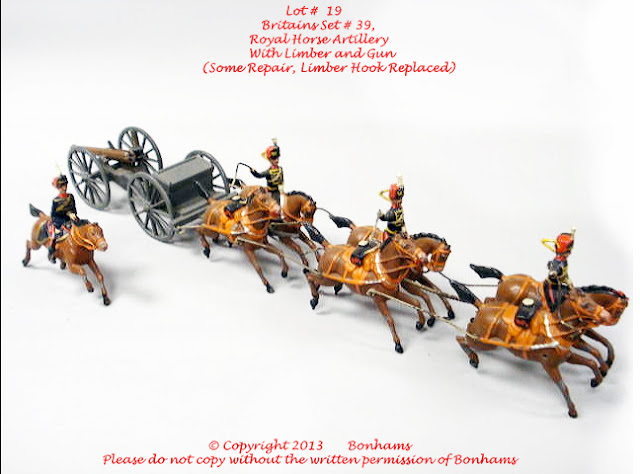 You always learn something when writing about toys. That  large wooden chest in front of the cannon is called a limber. 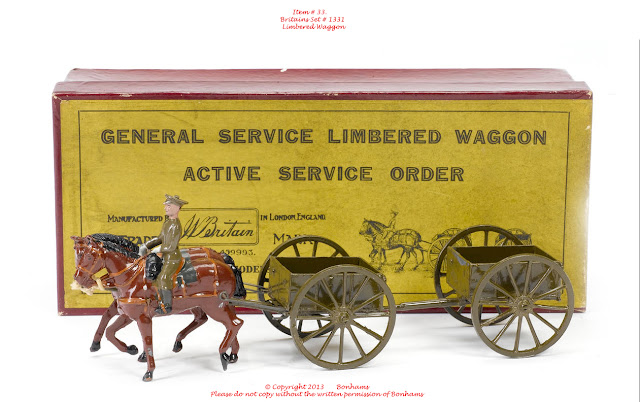 What's of interest above is the spelling of wagon as waggon.
Another interesting  thing is that these service sets were modelled in 2 several different styles.
One style was the walking style, while another one was the gallop. 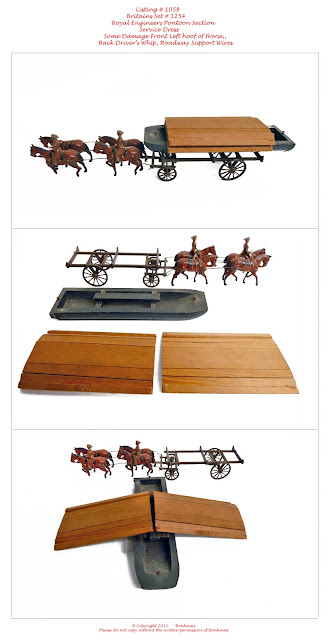 I've been looking for dioramas or miniature landscape recreations of a sitting army, a moving army or 2 armies battling. However, it's hard to find a well -photographed one with enough size to work with.  I took the 3 images on the Bonhams site, and combined them into a tryptic (3 images together).
This particular set of horses, river-crossing equipment, and of course the soldiers is my favourite. I wonder if these pontoons would be assembled in 3-4 sets to be able to cross a larger-sized river, than just a small gully?

So that's another post, and I'd like to thanks Bonhams for allowing me to use their photos. It certainly helps when you have large-sized and well photogrphed toys to work with.


Thanks for visiting, and as always, have a great day.
Stacey

Posted by toysearcher at 4:22 AM