The great benefit of being allowed to have access to images of auctioneers, is that they have lots of imagery due to the nature of the business - they sell antiques and toys. So it is with Skinner Auctioneers. They have plenty of listing for what I was writing about today, but I decided to choose the larger-sized ones. After I would enhance the images slightly in Photoshop, I'd type in the dimensions and descriptions. For many images, I kept typing Germany, but I was wondering where these toys came from. And then it hit me! I had just watched a biography on Henry Ford, and as it turned out,many of his employees were immigrants. At the end of the 19th and beginning of the 20th century, millions of immigrants from  allover Europe came to the USA. I'm sure German and other Europeans people with their young children, came along with the toys for their children.

What's interesting bout these toys is  that the toys are hand-crafted, and made of many different materials. Surely these toys required lots of man-hours  to make and manufacture,and also for sure was the fact that companies needed skilled craftspeople. I don't know if these people were paid any more than the cast-iron people or the tin-type people, but they certainly had to be very deterious with their hands.

http://www.skinnerinc.com/index.php
(Please click on the above address tobne redirected to the fine site of Skinner Auctioneers) 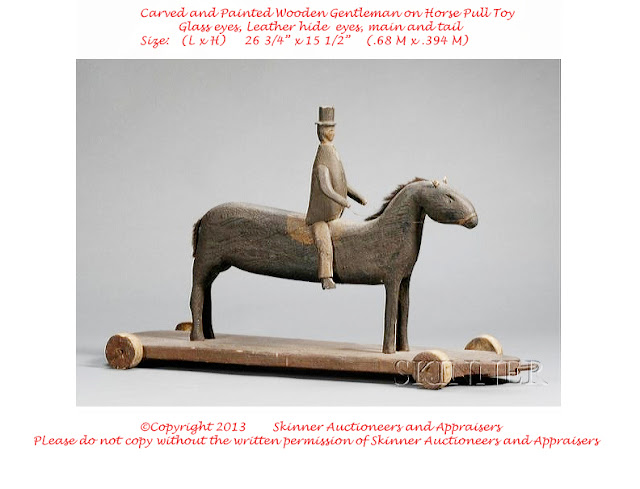 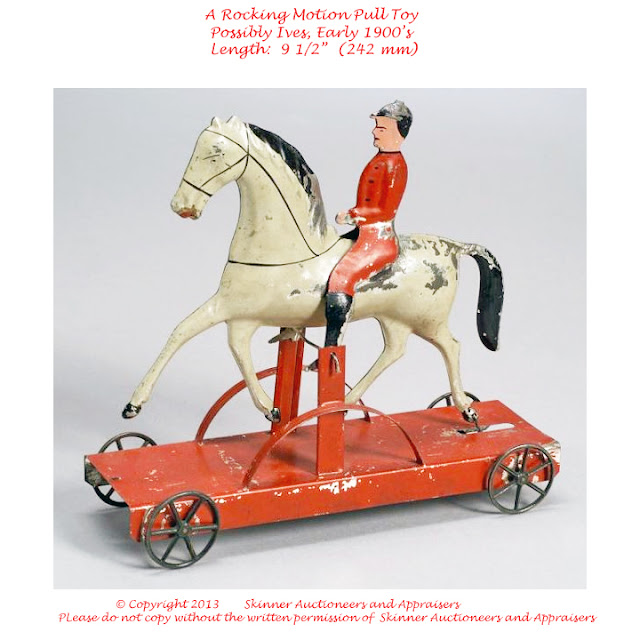 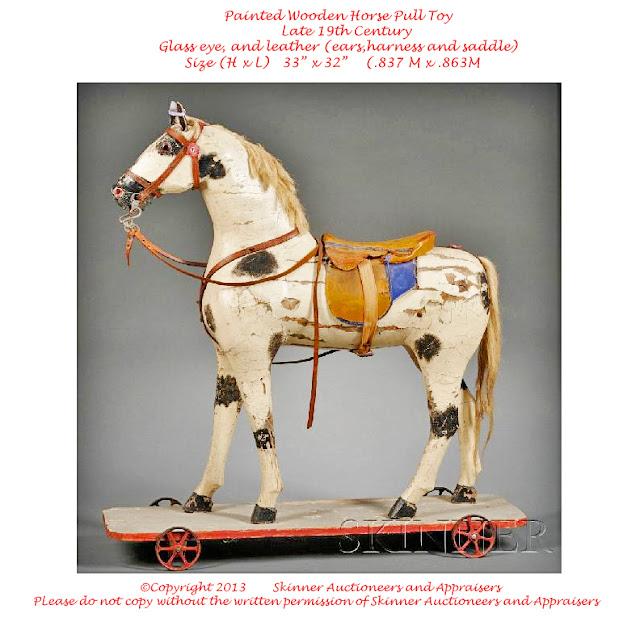 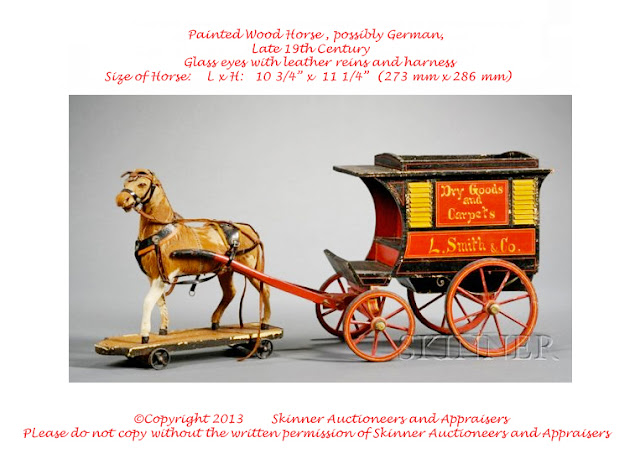 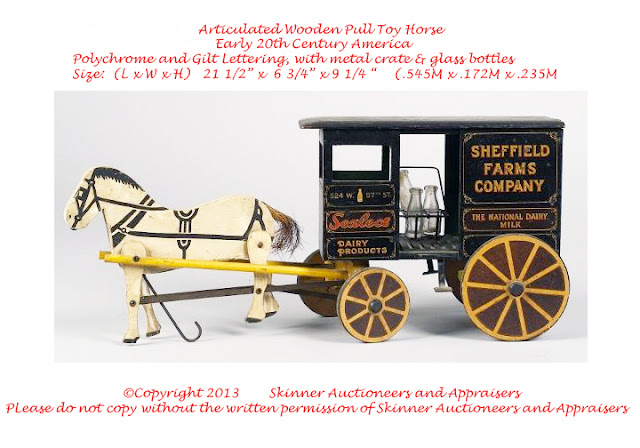 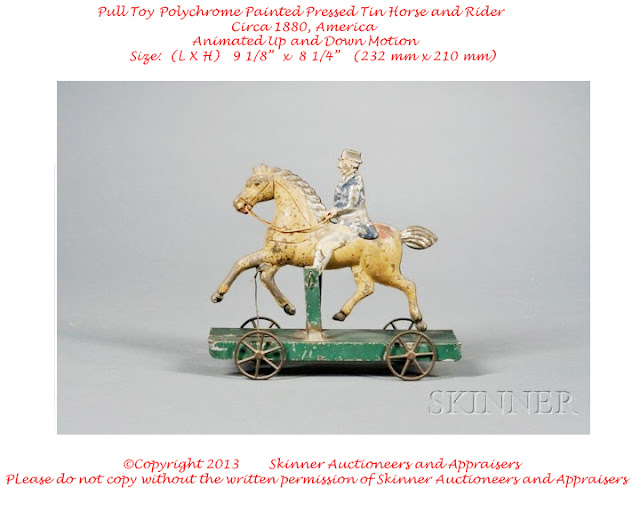 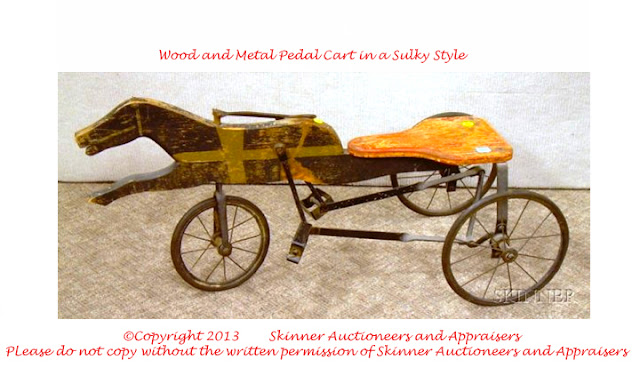 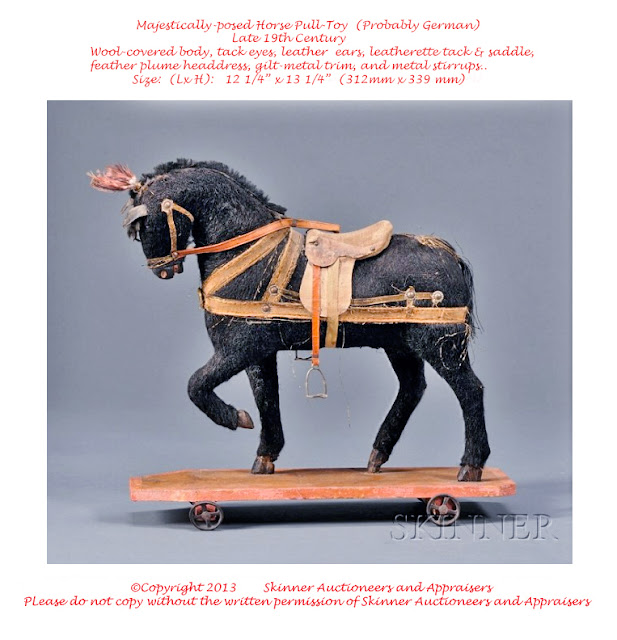 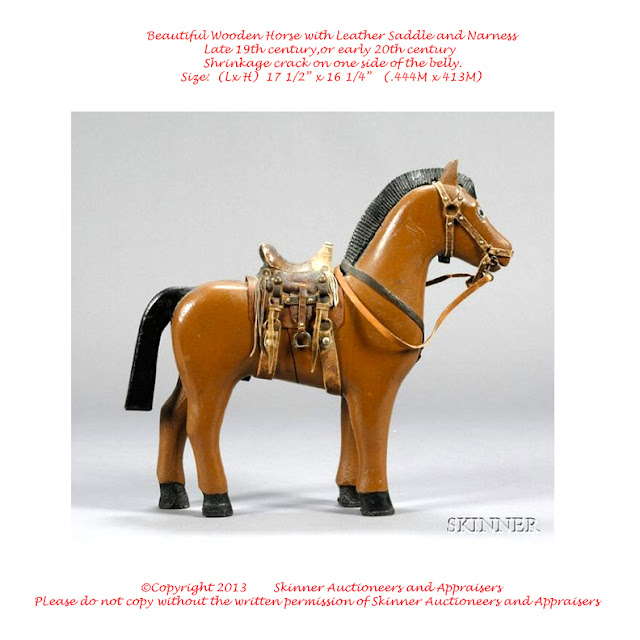 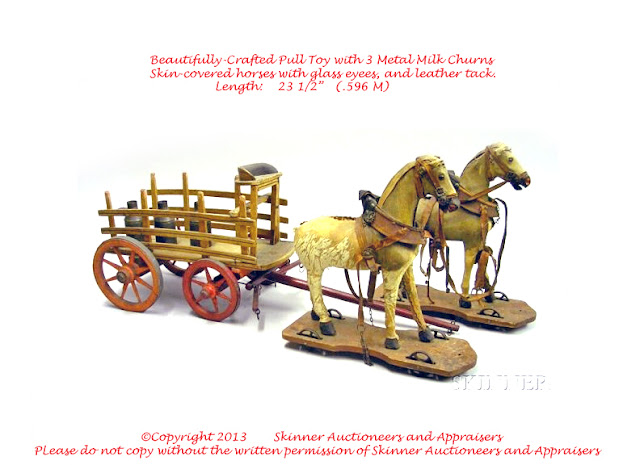 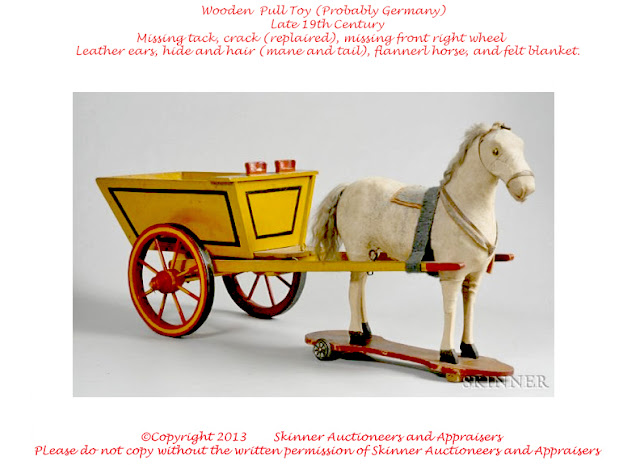 What I liked about researching this post was the diversity of how companies  and individuals and designers would craft. The basic "horse" is there, but the design ranged from naive art (folk art) in the first image, to more ornate and sophisticated models. The image third above from here reminds me of  a Greek  antiquity design, while the one above that reminded me of the famous and "regal"
Lippizaner horses from Poland.

Of course, I had a personal anecdote (story) to accompany this post. When my family used to go to "the country" as we call it up here in Canada,versus "the cottage" in the USA, we would rent a house in Mississquoi Bay. Gordon Roy had changed almost completed the change from farming to a fishing outfitter. He did have a team of horses and we'd see them up close, and I'd occasionally pat the. flash forward 25 years.I was dating my wife Heidi, who liked to ride horses, so I "guessed" that I'd to eventually ride a horse. I liked looking at horses, and watching them, but riding them was another story. Simply put I had eqinophobia - a fear of horses.   Of course, a horse never did anything to me, since I never rode one, and I never got close enough to do anything to harm one.

In the several times that I did ride with Heidi, I'd always ask for the "extra-friendly" horse. Of course who can tell if they're friendly. Heidi would tell me to bring carrots, and I would get the slow horse that was friendly.  Horses are like dogs,and they know when you're uneasy (scared silly) around them.  So out of the 4 times that I did ride, 2 of the rides were more like catastrophes.

In one case, the horse simply decided to walk,no matter what I did to "encourage" him or her to trot. Then he to into his head that it was time to return home,  after 10 minutes out of the stable. He galloped like he was in the Kentucky Derby, but in a straight line. I though I'd lose my head as he cantered through a short cut, straight through a forested area. In the other case, the  horse stopped after  a mile (1.6 KM) from the stable, decided to have a snack of leaves,and then decided to lie  down with me on him. I didn't argue with the horse,and let him do what he wanted.  I haven't been on or near a horse since then!

Thanks for dropping by,
and have a great day,
wherever you may be.

Posted by toysearcher at 9:20 PM