It's another very hot and humid day in Montreal, so I'm staying inside. An old Champion cast iron motorcycle caught my eye the other day, so I did a check to see how many motorcycle models the company made. I only found 2, so I decided to broaden the post about the company and other toys, rather than just motorcycles.

Surprisingly, the Champion Hardware Company stayed in business from  1883-1954. That's an especially long time for a hardware ad toy company, and even more so for any company! The founders were John and Ezra Hasenpflug who created the company in Geneva, Ohio (USA). THe range of toys extended from cast iron transportation toys to cast iron banks and cap pistols.They also made parts for many of the other toy manufacturers of the time.* 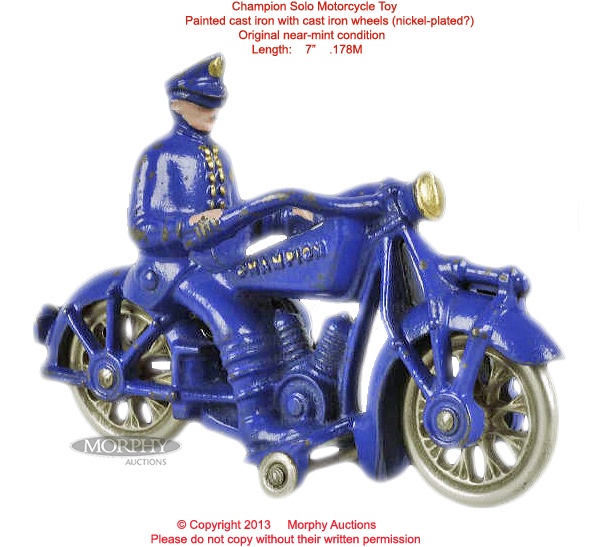 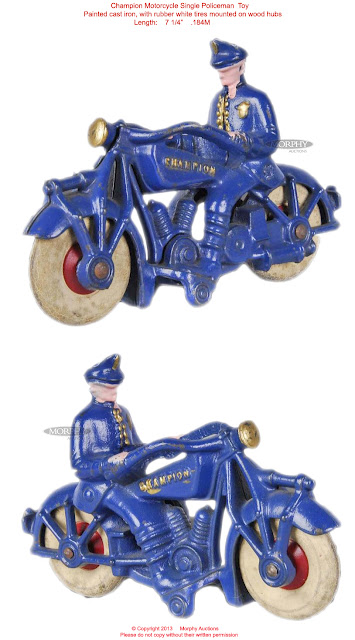 What I always find fascinating is the fact that all of the companies at the time made similar toys. Moreover, there weren't any lawsuits of copyright or design infringements. Everyone seemed to get along, so to speak.

Notice also the wheels of the motorcycles. There are both rubber tires or red wood hubs, and cast iron and probably nickel-plated wheels (tires and rims cast as one). I'm would guess that the rubber and wood materials were used later rather than earlier in order to save on  production costs. 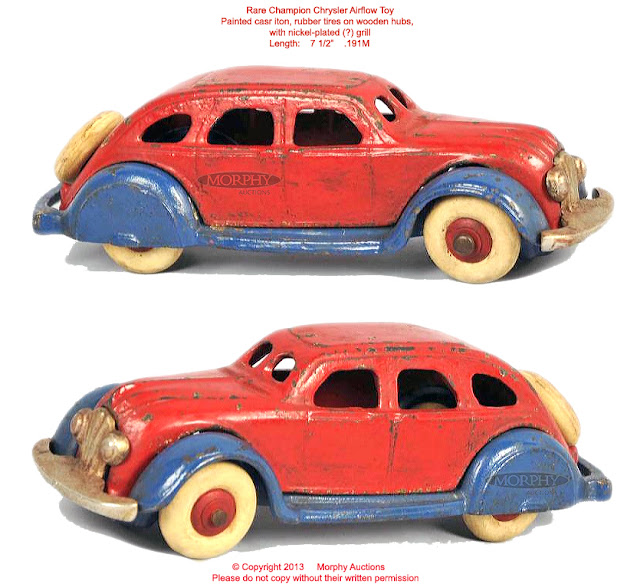 It's too bad there's no uniformity or standard when it comes to presenting antiques. There's nothing wrong with these 2 nice photos, but I would like to have seen what the undercarriage looked like from the Champion Hardware Company. If you go to my post on Hubley Airflows, you'll see their interesting and patented design for attaching the frame to the undercarriage part of the car. 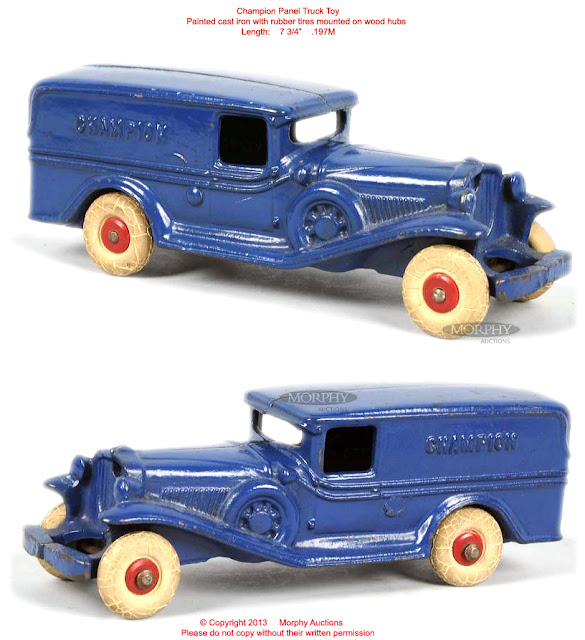 If you haven't  already noticed, all Champion toys have their name embossed on the toy,from the original casting or mould. So it's quite easy to identify a Champion toy. YOu just have to be careful of reproductions or fakes! 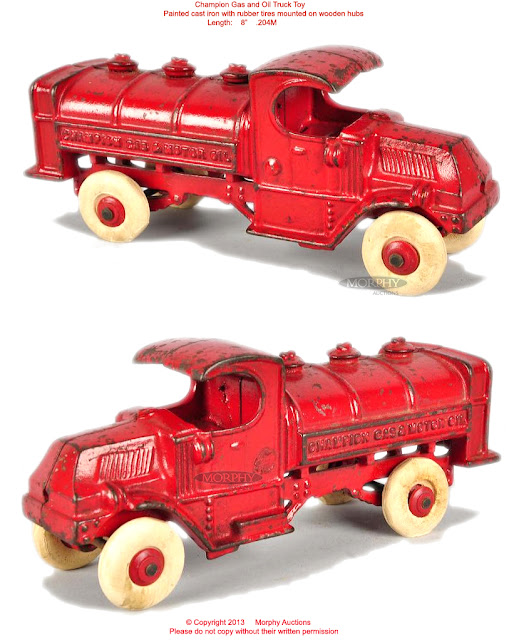 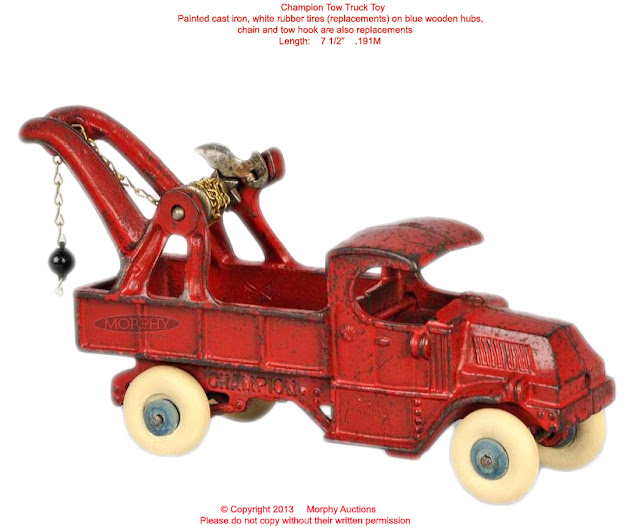 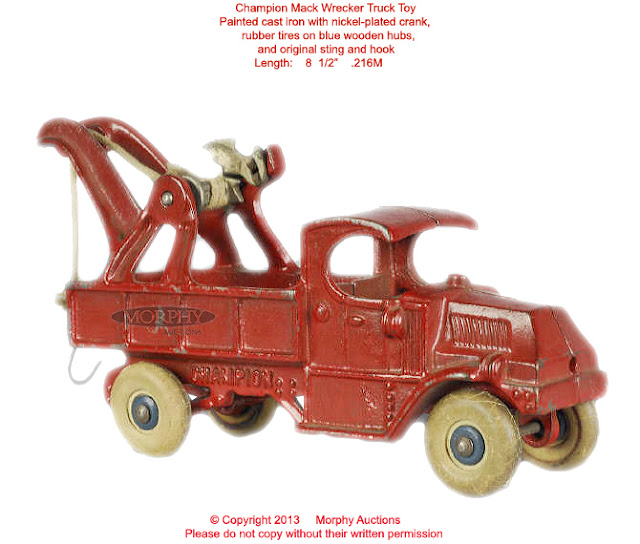 When I first read "blue hubs", I said to myself "OK, wiat and see if this is normal for Champion or a replacement colour." The blue hubs are the norm for both the tow truck above,  and the stake truck blow. That's a small detail,but it's important to any collector or auctioneer to know the "small detail"! 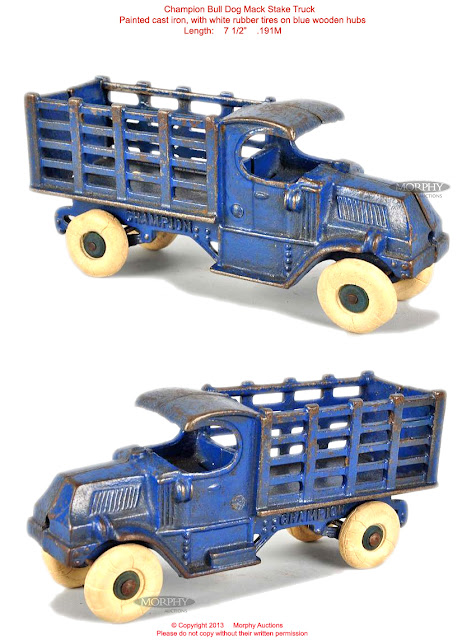 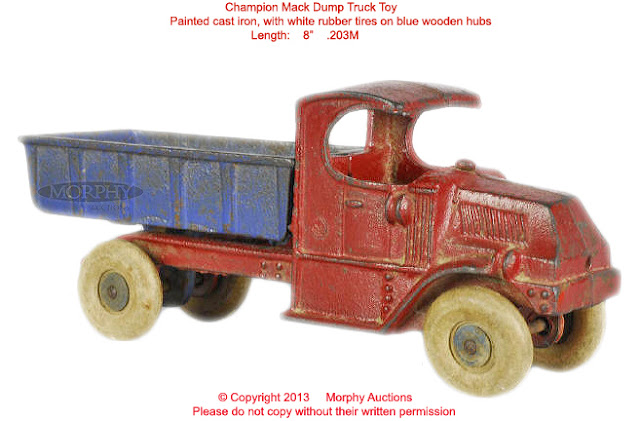 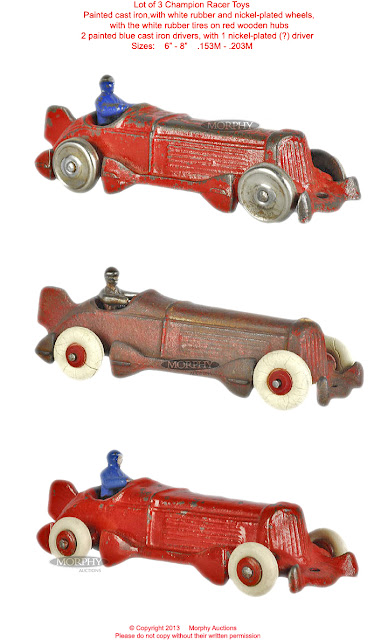 If you follow my posts, you'll have seen this photo before of the 3 Champion racing cars. I decided to use it again. They're beautiful as a tryptic (A grouping of 3 photos).

Notice the words "Still Bank" in the first line of the description.
A "still bank" just holds money, whereas a "mechanical bank" has one or more springs and movements for the coin to be deposited into the safe part of the bank. In terms of  cast iron collectibles, mechanical sages are much in demand, and the rarer ones fetch very high prices at auctions. Furthermore, many of then still work after 100 years. Again, there are many reproductions and fakes around. Once a company closes and there are no buyers of the patents, designs, or the name, anyone it seems can then copy and reproduce the original item. 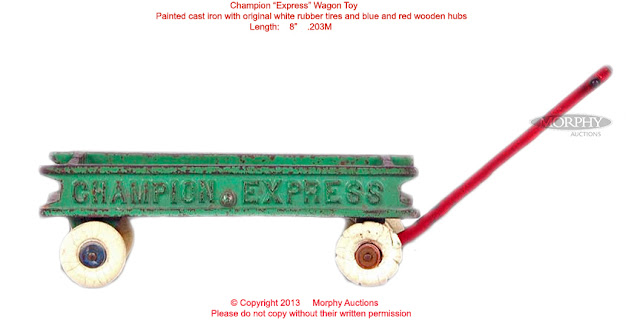 Thanks for dropping by,
and have a great part of the day wherever you may be.
and if it's a hot day, please drink lots of water,
and also take care of your young children and pets!

Thank you for this blog and your research. I was going to list a Champion motorcycle and found your post here. I would like to add that although the tires looks to be made of plastic but they in fact only covered steel wheel with a thick paint (or at least for the bike that I purchased).

We have a Champion Stamp Cap Pistol from the early 1900s. It was my husbands grandfather's. It's in very good condition and the revolver & trigger still in working order. We've not found much information about this and would like to find more information about it. Thank you in advance.

If you e-mail me at toysearcher@gmail.com with
3-5 photos (cell phone photos are alright) with soft lighting
I can try and find information about this toy.