Some Dent Toys with Their Original Catalogue Scans

Some Dent Toys
with their Original Catalogue Scans

It's a busy week this week. Today is Canada Day where we celebrate the unification of 3 British "colonies" into a single country called Canada. The original colonies were Nova Scotia, New Brunswick, and the Province of Canada. That happened on July 1, 1867 under what was then called the British North American Act.  Not everyone is "happy" about this, if you ever follow Quebec politics.  Then later on this week on July 4, there is Independence Day in the USA, where the USA became independent from Britain.

Changing the subject, yesterday, we finally had a beautiful sunny day, the first in a while. If it rained any longer, I'd go into the business of selling mushrooms from my lawn!  Today, the weather is partly cloudy, to be differentiated from partly sunny, both terms of which I can never tell you the difference!

History of the Dent Company
or
Staying on the Topic

I did some research on the net, and discovered that the Dent Hardware Company was founded in 1894 by Mr. Henry H Dent. Mr. Dent was an intelligent and energetic person who had the great foresight to manufacture ice boxes (the forerunners of today's refrigerators). For those who don't know,  an "ice box" was a well insulated and sealed kitchen unit that held a large block of ice (usually on the top) and food (usually on the bottom). The cold from the ice helped preserve food for several days or longer. Of course, back then people ate "fresh", and it was important to keep the food from turning bad. The ice was cut in winter from rivers or lakes, then stored in huge warehouses over the the rest of the year - imagine that!

What  made Dent ice boxes different was the fact that they were beautiful and elegant.  They had ornate handles, hinges and latches that were all cast  in the Dent company's own foundries.  Within a few years the company became well-establihed through their high-quality and design. Of course, by the later 1920's electricity in the large US urban areas was established, and the refrigerator (an e"electric ice box" began to gradually replace the ice box!  When I was a kid (in the 1950's), we'd go to Mississquoi Bay in Quebec. It  was a country vacation area then, and my  Aunt Sylvia and Uncle Sammy also went.  We had a "real refrigerator" and it had an ice box. A man on a horse and cart would haul ice, and bring it to their cottage every week!

Of course, most cast iron foundries at the time (1860's-1920's) that made hardware, also started making cast iron toys, and the Dent Hardware Company was no different. In fact, they were one of the more successful companies of the time ,along with other companies like Kenton, Kilgore, Hubley, and Arcade.

Flash forward to today, and the company of some ownership changes over time, and Mr. Harry C. Dent, the grandson of Henry H. Dent retired after having owned a new company from 1955. At that time, he left his business partners to form the Dent Manufacturing company. IN 2007, the Dodge Family purchased the company from Mr. Dent, and the company was restructured,and is now known as the Dent Design Company. The company still makes reproductions of their original hardware way back from the ice box era! 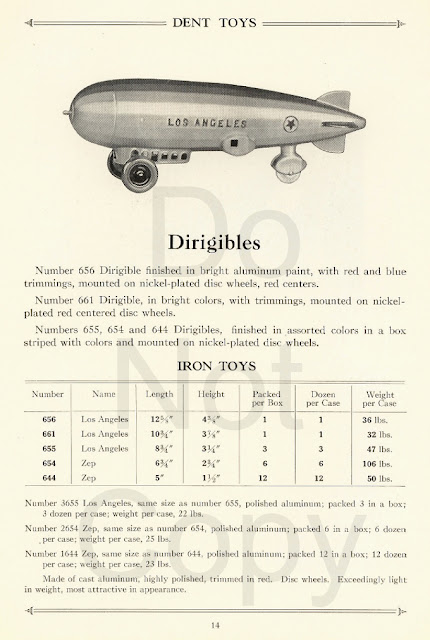 What's interesting for me is the sheer weight of these toys. For this toy, the largest of the Dent dirigibles or blimps is the fact that it weights 3 pounds or 1.36 kilos! What's even more interesting with the Dent airplanes and dirigibles is how many different sizes and colours that were offered to the customers! 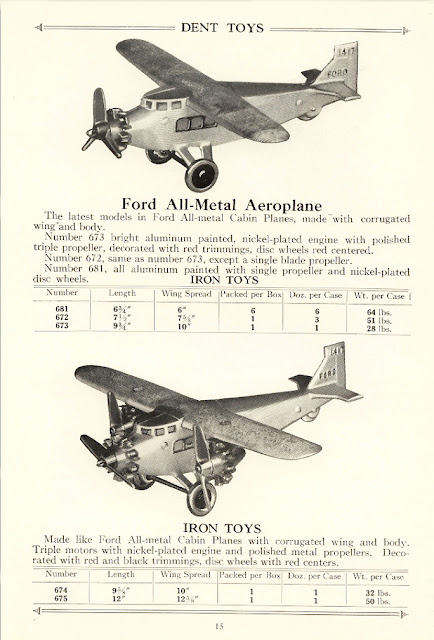 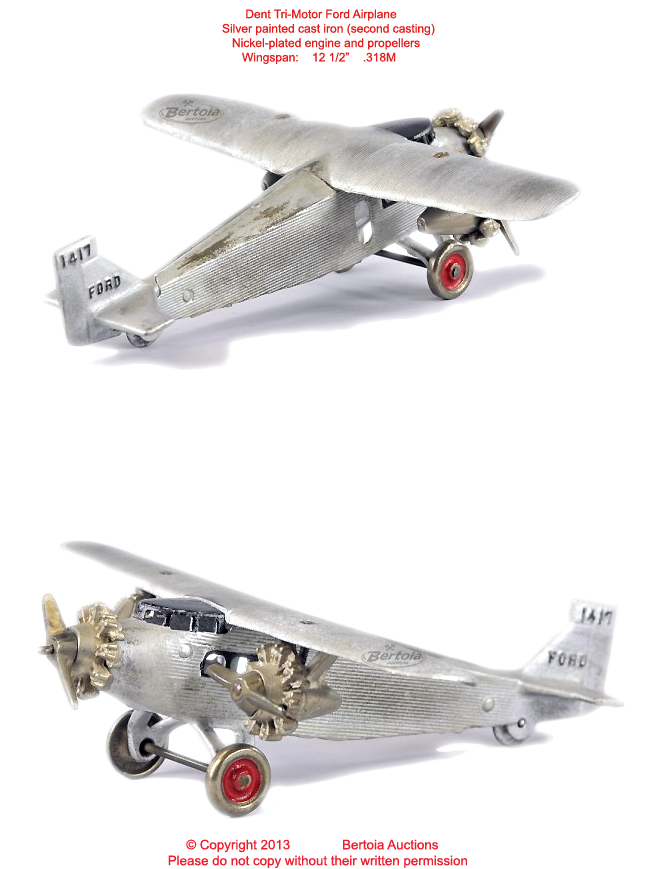 Gorgeeeeeous!
These are how airplanes looked in the 1930's and not everyone would ever have seen one,especially in the farm belts of the midwest USA,unless it flew over a farm in the USA. And the materials from which the toy was made are also interesting. This Dent airplane was made  of cast iron, and nickel-plated engines  and propellers (3). The disc wheels are also nickel-plated and painted! 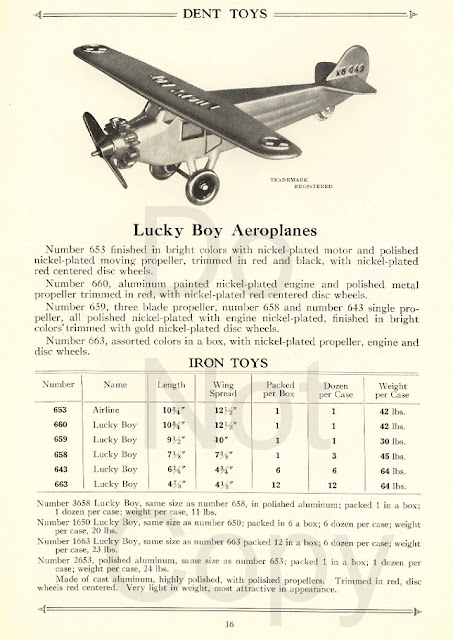 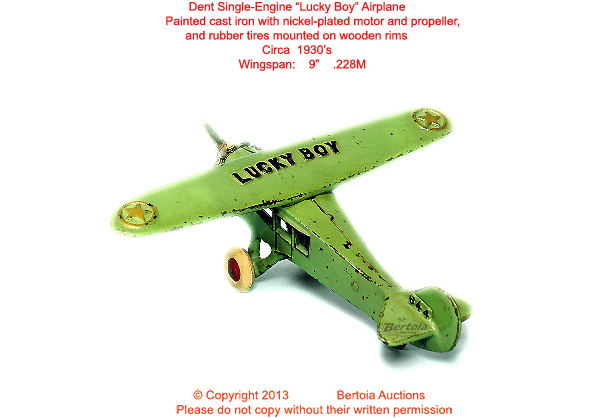 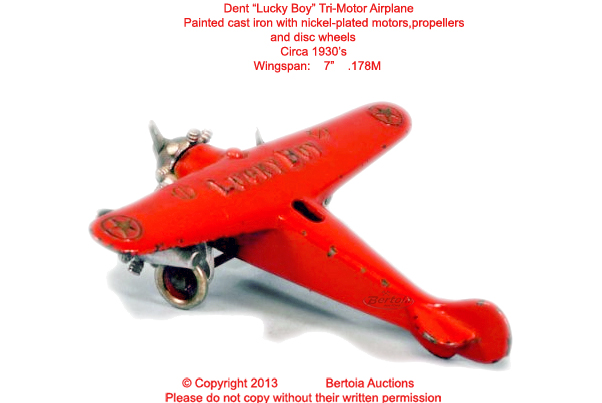 I'll be writing more about the Dent airplanes in the future. I had intended to add a few more toys, but the catalogue from which I used the photos above was probably an early edition. As such, it did not show toy airplanes that I had screen captured. These were probably made after this particular catalogue.

So this is the first post for the second half of 2013, and I hope you've enjoyed the photos that I presented today.

Thanks for dropping by.

If you're Canadian, Happy Canada Day,
and for everyone else have a nice part of the day,
wherever you may be.
Stacey

Posted by toysearcher at 1:14 PM

I am a Dent granddaughter. Toy planes were my dad's favorites. I have a large collection. Are any of these for sale?

Thanks for reading my blog and for writing. All of the toys presented on my blogs have usually been sold. However, if you visit liveauctioneers.com you can do a search for "Dent cast iron" for future auctions. Their calendar usually extends to about 2 months into the future, but not many auctioneers will post so much into the future.

I would like to invite you as a guest on my blog. You would be free to write your own bio and narrative for the story. As well, simply e-mail me (my address is below) photos of at least 4" x 6" (300 dpi or 300 pixels per inch). WIth this size I can easily improve them in Photoshop (with your permission).

I hope that you will say yes, as this would be most interesting to all readers.

Have a nice day,