When I was buying old toys on E-Bay, I always like to have old and antique toy books or catalogues to cross-reference the potential purchase with an original image and its description.  You can rely on E-Bay sellers to be trustworthy, since E-Bay favours more the buyer than the seller.  Therefore it's in the sellers interest to be honest.  Otherwise, there will be a complaint, and the seller will have to resolve the case. Also, there will be negative feedback by the buyer on the comment page of the seller.  However, this often doesn't seem to mean anything to many people, as I've seen some sellers have 100 negative feedbacks in 6 months,but their total was 2000 sales. So not even E-Bay seems to care sometimes! As for auction houses, although I've never dealt with them, they have to be totally honest and maintain their reputations. The auction house is often dealing with extremely rare and costly items, and itis 100% in their interest to maintain an extra level of honesty and good will!

I purchase a CD copy of a Dent 1920's catalog from a company called Cabin Creek Enterprises LLC as a PDF (Portable Document Format) download.  There is an extra page added to the catalogue that says that they maintain a copyright over the reproductions. I'm not sure that's totally legal, but I respect their notice, and regardless, they do allow copies to be used for personal purposes.  The reason for my use of their photos is that I don't make any money from my blog, so I hope blogging is considered personal. As far as whether or not they can issue a notice about their ownership of the catalogue, is that since the toy company is no longer in business, then the catalogue might be allowed to be reproduced, as it had by other companies in the past. Currently, Google and E-Book reader companies are "selling" books whose authors have long since died, and probably have no legal heirs to the rights to the books or catalogues. However, I am not a lawyer or expert, so I there have attached copyright notices to each image from Cabin Creek that I chose to use, along with a watermark. 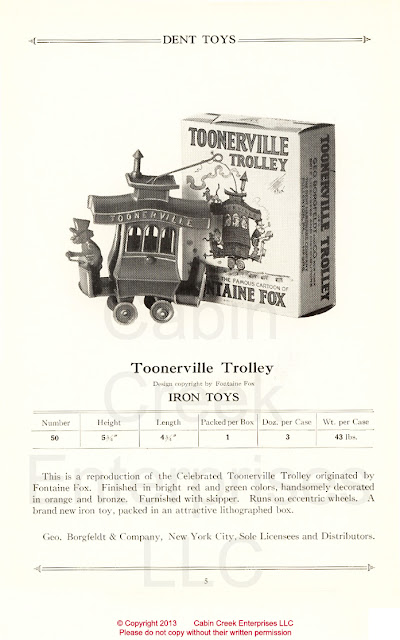 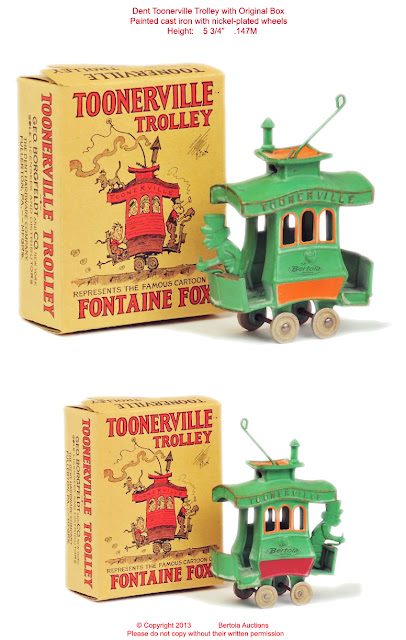 Before radio and television, there were newspapers. And in the newspapers, the comics and "funnies" were a large part of the daily or weekly newspaper. Adults and children would follow the characters in the funnies each day or week, and they got to know these "characters" quite well. Naturally, this was not lost on toy manufacturers, and many toys became to be based on cartoon characters that would be licensed by the owners of the particular cartoon. 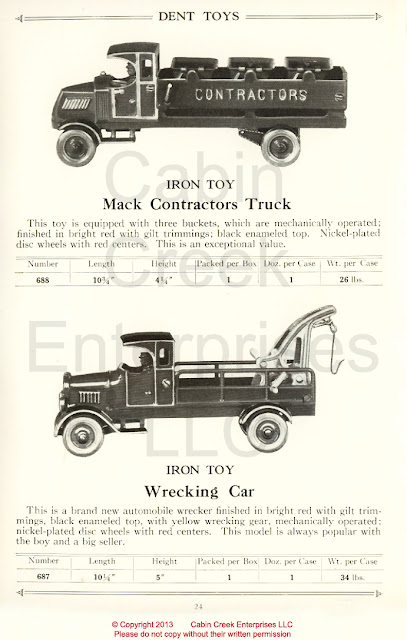 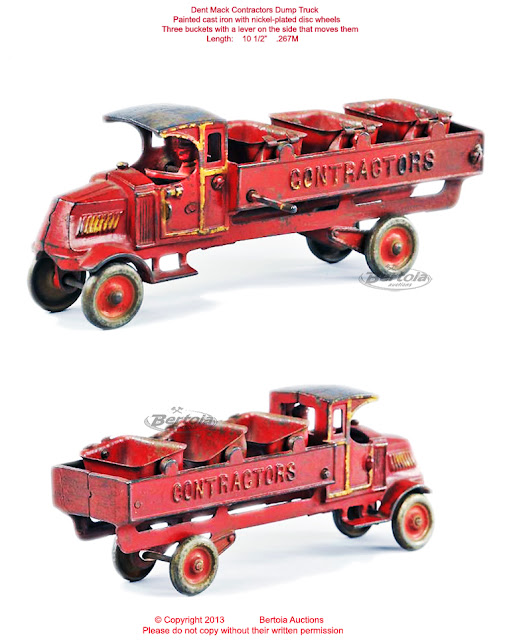 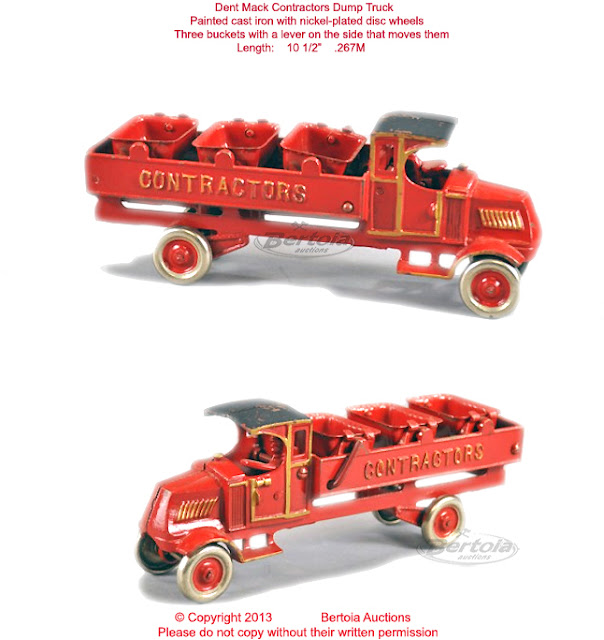 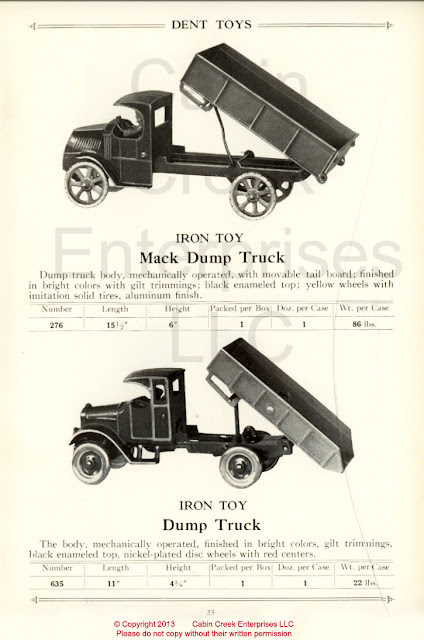 What's noteworthy here is the description by Bertoia. Often, old toys that had parts missing or broken would have replacement parts added, which might be the wrong ones. Bertoia, and other auction houses probably have a library of old books and catalogues to ensure that what they are selling is correctly described. And should there be any differences, they will ensure that these are added to the item's auction description. 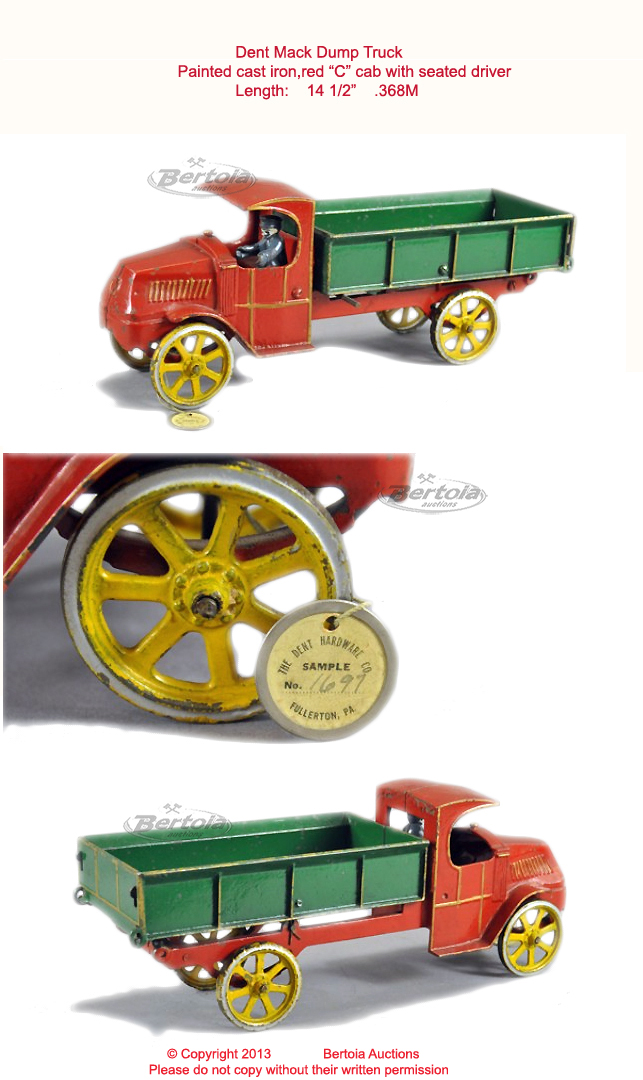 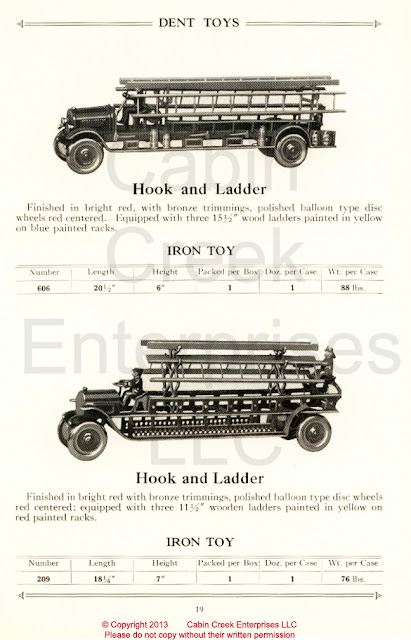 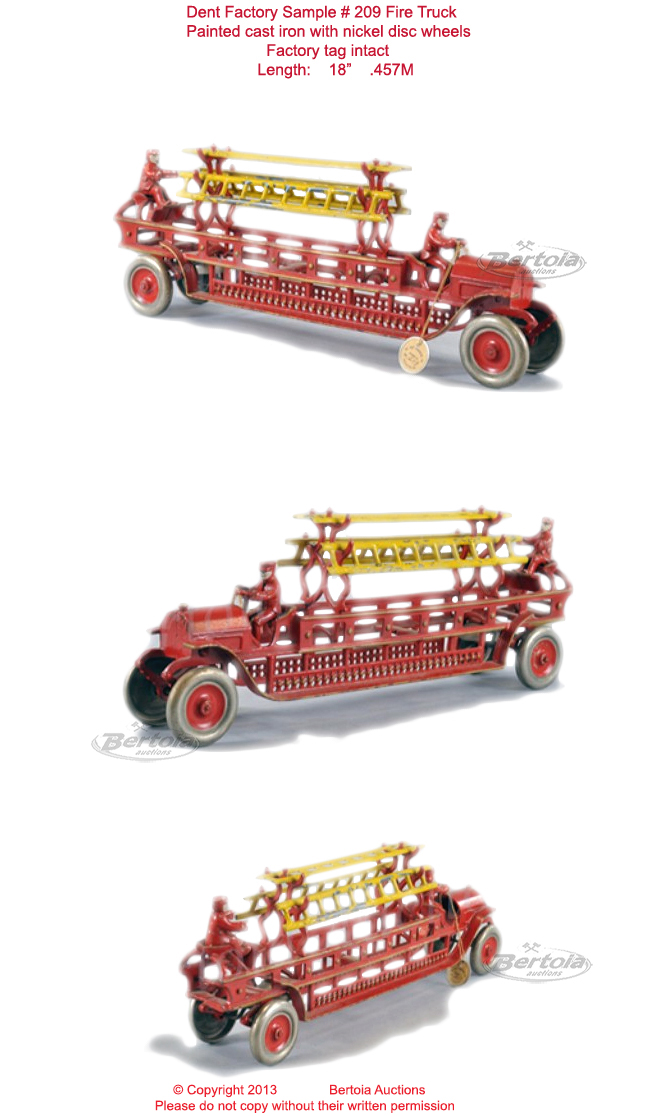 That small yellow tag attached to this firetruck  is similar to the  toy above it. BOth came from the original company, and were shelf samples for sellers to refer to when they came to the showrooms of the Dent Company.

In the catalogue that I purchased, there were many different firetruck models. What interesting is that I thought I would be able to find all the old toys from the catalogue on Liveauctioneers, and then at the actual  different auctioneers  websites. That didn't seem to hold true. I wonder where the ones I didn't find are, and how valuable they are? 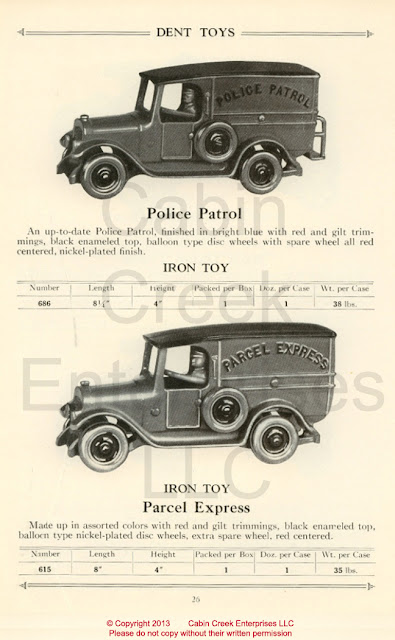 The Dent  catalog that I purchased doesn't indicate the date that it was printed. It is identified as
"Dent Toys, Catalogue No. 10"

If someone has the same catalogue,and knows the year that this catalogue was issued, might you please send me an e-mail  or add a comment to this post. I will then update this blog post. 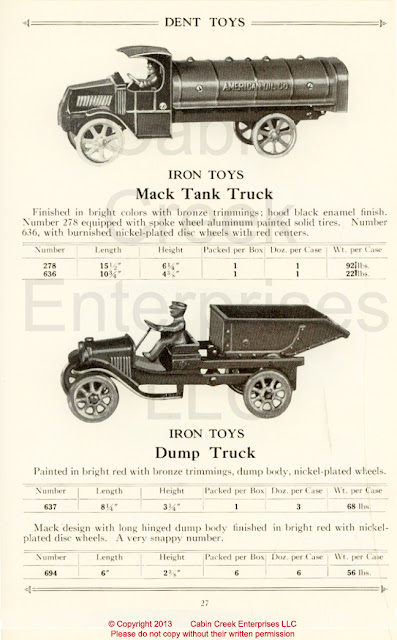 If you read the descriptions that I add to most images on my blogs, you'll have realized that most of today's toys were quite big!  What's also interesting is that most of these toys garnered handsome sales for the auctioneers and the seller of the toys.  I mentioned before how "substantial" cast iron toys are in my hands. And these large toys would feel even more "substantial"! 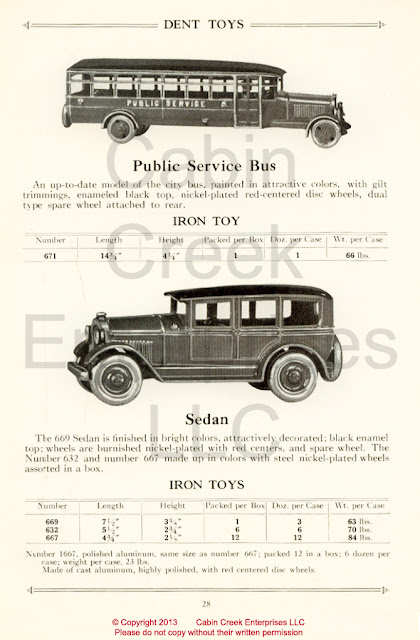 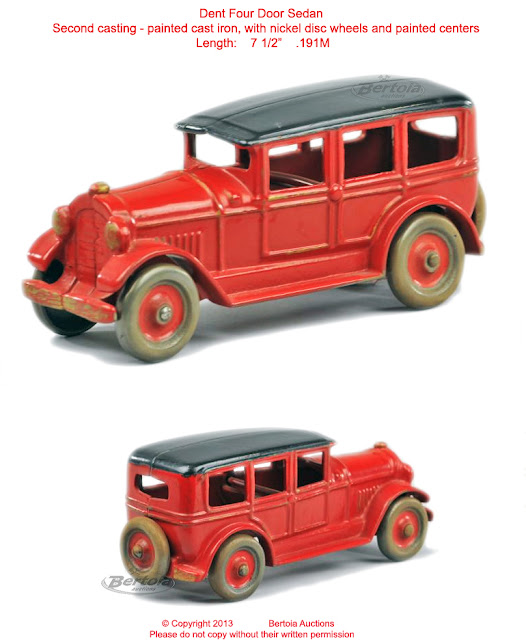 The above sedan didn't yield a  high price at auction, but it did receive a winning bid  that was quite respectful. I then notices in the description that the words "second casting" were described. What this means is that this was not made  at the time of the catalogue. Someone might have had access to the original moulds and made this cast iron sedan later.  That's also part of the "detective" work and experience that quality sellers, and auction houses or companies know!

So if you're an American and are reading this , may I wish you a Happy July 4 (Independence Day) Holiday. And for everyone else, have a nice day.

and have a great part of the day,
wherever you may be.
Stacey

Posted by toysearcher at 6:29 PM