So What Did the Original Toy Have?

So What Did the Original Toy Have?

I'm fortunate and thankful to be able to have access to several highly-rated and honest auctioneers. They also happen to sell a lot of antique toys over the years,so eventually,you will fine an image of a toy that is complete. Of course, the auctioneers will inform you what may be missing or is damaged. But it's still nice to see a completed toy!

While I was writing about fire wagons, pumper,and trucks, I discovered a company that I thought I never heard of, so I did a fast search on my blogs. It turned out a had added a Kelmet toy to one post. I'll be writing about the Kelmet toy company tomorrow, but today, the topic is "so what did the original toy have?".

As I mentioned before, most auctioneers, E-Bay sellers and stores, and collectors will inform you what the condition of  an old or antique toy is, and they'll also mention what might is missing. I'm sure many of the auctioneers have vast libraries of  old and antique catalogues.  When I wrote about Dent,  last week, I included several pages of a very old  catalogue to cross-reference with the actual sold items. I also have some old books, and more current books about old and antique toys, and I"m always looking for more.

If you go on the Net, you'll find sellers and E-Bay stores that have old catalogues or reproductions of old catalogues for sale. Also book stores that sell old books will also have the same items, however, it's harder to find them there.

So the question is: what did that original toy have? Another way, is simply to go to Liveauctioneers or ICollector, and  do a search for one item. Most American or European toys that were popular will have been sold many times over the last 15 years. Also, if you go to some of the antique magazines either in stores or on the Net, you can find articles on old toys. And another source, are some of the museums that I have the privilege to write about.

So what toy did I decide to select for today's post? A 1927 Kelmet Fire truck. I only found 3 Kelmet fire trucks from Bertoia Auctions, but that was enough. I also found more from Dan Morphy, which I'll include tomorrow in my Kelmet toy post. As you know, I prefer to post daily with just 1 person, collector or auction house.

** When I redirect you to Bertoia Auctions and Morphy Auctions, I'm redirecting to a great feature that both have through a software or company called Auctionflex. That company or software allows you to do a search for a specific toy, and all of the "hits" will show up next. Of course, you can also go to either of their fantastic websites and search through each of their past auctions. 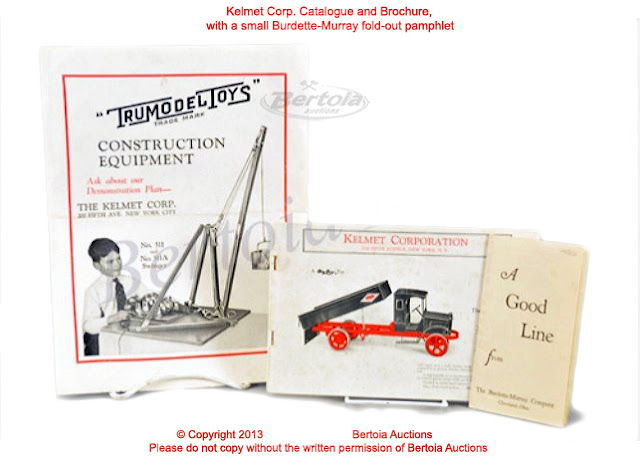 Here's a past auction listing for a Kelmet trio of catalogues including a pamphlet of what I assume was a store called Burdette-Murray. 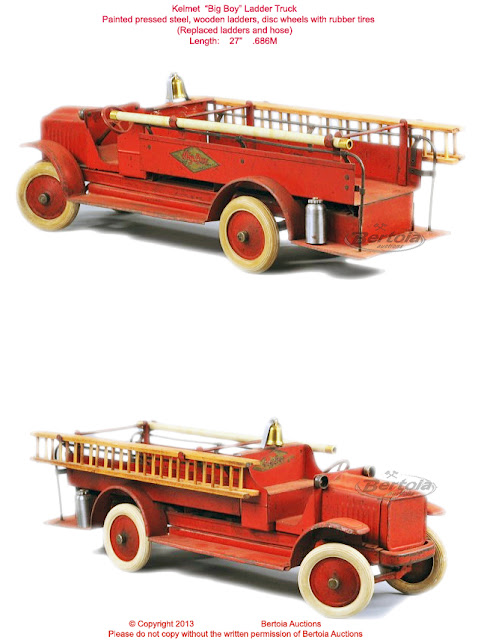 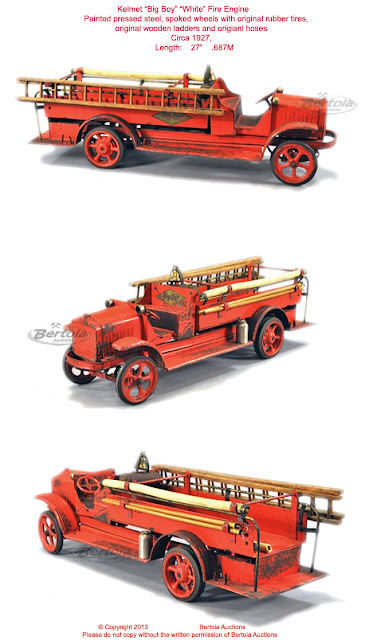 I've presented the 3 Kelmet listings in sequence of their accessories and their  completeness.
THe only factor that I'd need to research is when were the wheels (rim in today's terminology) changed from spoked to disc wheels? The image above has spokes or radiating central supports for the wheel. The previous  2 listings had disc wheels. Personally, I would think that the spoked wheels first were issued with the original toy, then came the disc wheels. By the way, the spoked wheels in the above listing were cast iron - a totally different material from the toy body.

So? What did the original toy have when a father bought this toy for his son or daughter?

By the way, "Big Boy" was the name that was used when Kelmet manufactured for the J.C. Penny company.  Several toy manufacturers made toys and used other names or labels on toys. THis still happens today.

My wife Heidi and I purchased a dehumidifier a few years ago.The label was Whirlpool, but the item was manufactured by another company licensed to do so. I had a minor problem with the item and had to contact the company. I phoned the 1-800 Whirlpool telephone number only to find that the licensing story, and I was given the telephone number of the manufacturer to contact.  Electrolux, famous for their vacuum cleaners sold their name to another company. We purchased a new vacuum cleaner, which is still sold at the original store we purchased our first one from. However, the vacuum is now under the name Aerus, and the item is called a Lux Classic".

The recent tragedy that I mentioned several days ago in Lac Megantic, Quebec, has worsened as the fire was extinguished and the search for missing people has started.The Quebec and Canadian Red Cross are asking people for donations to help the city out. As well, sadly there was a major loss of life of firefighters in Arizona.  I'm sure the American Red Cross  is also asking for help for the bereaved families.

Thanks for dropping by,
and have a great part of the day,
wherever you may be,
Stacey

Posted by toysearcher at 3:00 AM