I will be adding more material to the introduction, so please bear with me. I had originally decided to introduce the later 1920's cars from this great toy company, but I took on a task that was gargantuan. So as I went to my computer this morning, I decided to create an introduction for Kingsbury, and work on the cars later today. That I'll post for tomorrow.

The history of the Kingsbury company is fascinating. It started out in Keene, New Hampshire (USA), one of the smaller states in the America. Mr. James S. Wilkins founded the company in Keene, New Hampshire in 1890, as the Wilkins Toy Company. In the early years the company manufactured toys similar to other companies of the day. An example was the cast iron fire wagons (horse pulled). Later, with the development of the car,  pressed steel cars were introduced. The early cars were equipped with disc wheels with white rubber vulcanized to the discs. The toys were "motorized" by a wind-up mechanism placed at the rear of the car or truck.

In 1919, the name of the company changed to the Kingsbury Manufacturing Company. By 1926, there were many well-designed and well-made cars coming out of the factory.

I'm going to start this introduction with much when Kingsbury was at its peak of glory, success, and production. This would be about the mid-1920's.  AS you will see, the quality,  diversity, and  appeal of these toys were definitely outstanding!

When you look at the Kingsbury cars and trucks, you will notice several characteristics that were intrinsically common to all. First the white rubber tires have the Kingsbury name in raised letters. Second, the paint scheme is usually two-tone with an accent colour. Then there is the fine grillwork of the car or truck, and of course the high-quality wind-up clockwork mechanism or "motor". 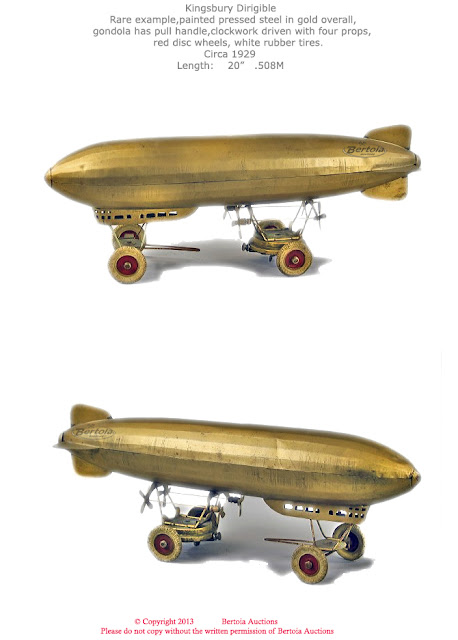 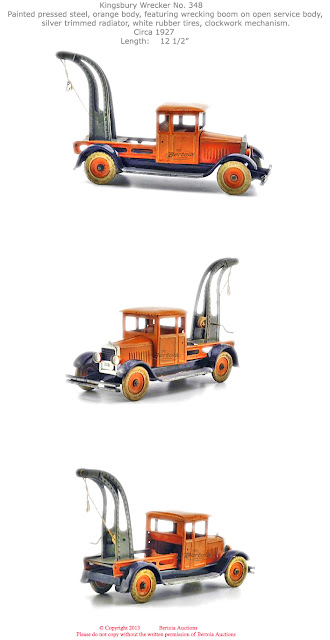 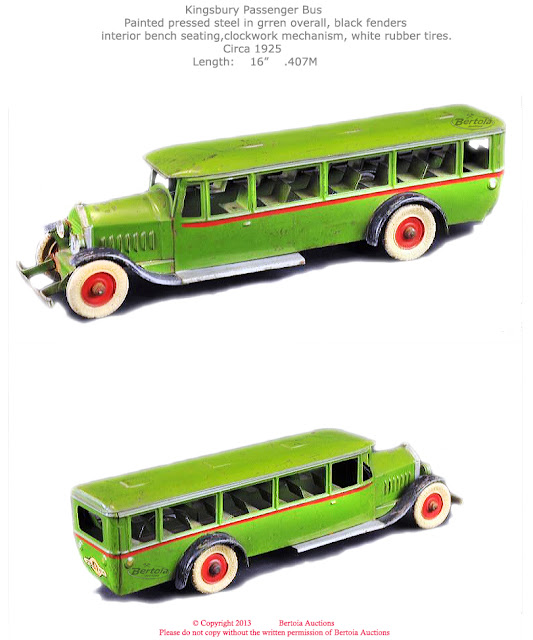 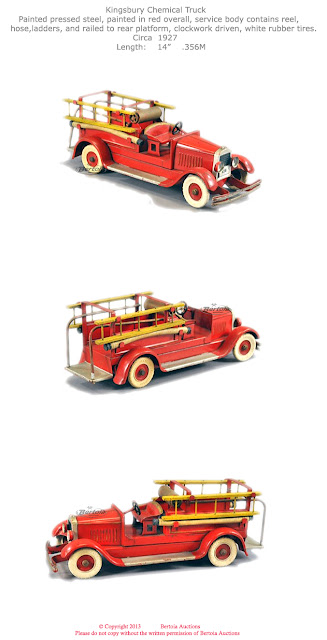 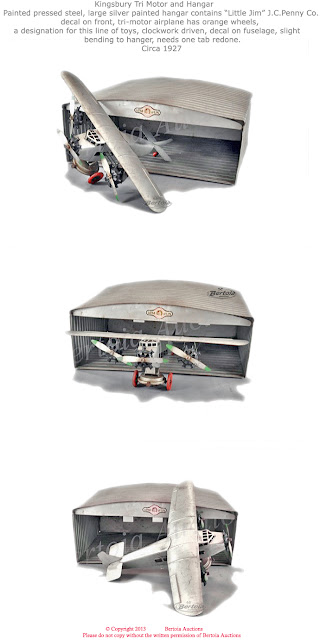 I'll have to find out the date that this toy was produced, but I would guess that it was also in the mid-1920's or slightly later. At that time in the "real" world,  breaking the land-speed record was a big event , had worldwide attention and was very newsworthy. In Europe and in America, cars were being tested and designed to go very fast (at the time, of course). The above car was modelled after one that at the time had gone 315 mph  or  522.90 kph.

Canada  accepted the change from Imperial (British) to Metric (Europe) since the days when our Prime Minister, and the Liberal Party enacted legislation to change out standard of measurement to metric.( around 1969-1970). I easily adapted to the change but never liked it. I still convert everything in my head. At the time, what then happened is that a gallon (4.4 litres) of paint slowly got smaller. It started out at 4.4 litres, then got smaller to 4 litres. Then the North-American Free Trade Act came in, and the 4 litres "adapted) to the size of the American gallon (3.78 litres). Nowadays, our "measurement of paint" is close to 3.6 litres.

What never happened was the lowering of the price with the shrinkage of the standard of paint size!

Of course, what I is like (at age 64) is the measurement  unit in speed when I cycle.

It always feels faster and sounds better when I go 33.2 kph, rather than 20 mph!

Thanks for dropping by,
and have a great part of the day,
wherever you may be,

Posted by toysearcher at 9:54 AM

WHEN WAS kINSGBURY TOYS PEDAL CAR, PORSCHE MODEL, MADE? VALUE NOW? STEERING WHEEL HAS BROKEN AND A COUPLE OR DINGS IN PLASTIC BODY.

First of all, I don't think that Kingsbury ever made a pedal car, which is a large-sized toy.
Also, they would never have made a Porsche (German manufacturer), nor made anything from plastic.

Stacey Bindman
Writer of this blog

Hello Stacey, I just finished reading your post "Kingsbury Toys... An Introduction" while researching Kingsbury toys for a little column I'm writing for ELF magazine, the weekly lifestyle and entertainment magazine of The Keene Sentinel. I really appreciated your admiration for the toys and wonder if you would share a few of your images for my article. I don't get paid to write these pieces and the only compensation I can offer you is a credit in the article. Thanks very much for any help you can offer!
Michael Breshears
mijo2306@gmail.com