I've written about pressed steel toys, but when I checked yesterday on my post list, I hadn't written a post about the Keystone Manufacturing Company.  The founders of the company were Mr. Chester Rimmer and Mr. Arthur Jackson. Originally, the company had specialized in movie machines and producing comedy films for young children from 1920-1924.  However, by 1924, the company changed course and started to produce the Keystone brand of pressed steel toys.

They started out big, both in the sense of manufacturing larger-sized toys, as well as producing them in large amounts. Talk about having confidence in your product! They were given permission by the Packard Motor Company  , a highly-successful car and truck maker at the time, to produce reproductions of their truck models.  At the time, America was expanding from the east and moving westward.  Consequently, companies of all kinds were created to manufacture all kinds of products. Steel became a big commodity to be used, and huge machines were created to use steel in all kinds of different shapes and forms. Steel was able to be thinned into sheets and rolled up. Later, it could be cut and then pressed into various shapes via the use of  tremendously strong press machines with 100's of tons of pressure. The machine would press a piece if sheet steel into a mould (cast), and out would cone a shape of a toy. At the time, there of course were other toy companies doing the same, such as  Kingsbury, Sturditoy, Buddy "L", and Hubley, to name a few.

Keystone also made toys for J.C. Penny, the famous department store chain. The J.C. Penny name of their toys was "Ride-Em", and these toys entered the market in 1932. Each toy made of a Packard truck had the famous Packard logo placed at the front of the truck. As well, each and every toy also had the Keystone logo, usually on the side of the toy.  In 1937, the Packard line of toys was phased out along with the Packard logo. A new design to the Keystone toys began with a new cab (for the driver and passengers), and a new hood. The new hood had horizontal ribs or louvres at the sides.

Before the start of WWII, Keystone purchased the tools and dies from another famous company of toys at the time - Kingsbury Toys (New Hampshire, USA). Kingsbury, sadly (for toy aficionados and children alike) had decided to venture off in a different direction to manufacturer dies. The good news is that that great toy company is today still in business.

There's still more history, but for today, I'll stop. I'm presenting the toys mostly from the 1920's that are still around, and in great shape. I don't think people in 80-100 years from now willbe able to say that about the current and mostly plastic toys.

My  sources of the Keystone Manufacturing Company history came from  2 great sites for learning about toy history, as well as seeing marvellous toys.

PLease click on each of the names below to be redirected to these 2 great websites:

* The link to the Bertoia site is different from my usual linkage to the great Bertoia website.
The one above will take you to most of their previous auctions going back to March 2009. If you want older dates, you'll have to go to Liveauctioners, where Bertoia and many other fine auctioneers have all of their auctions going back many years. 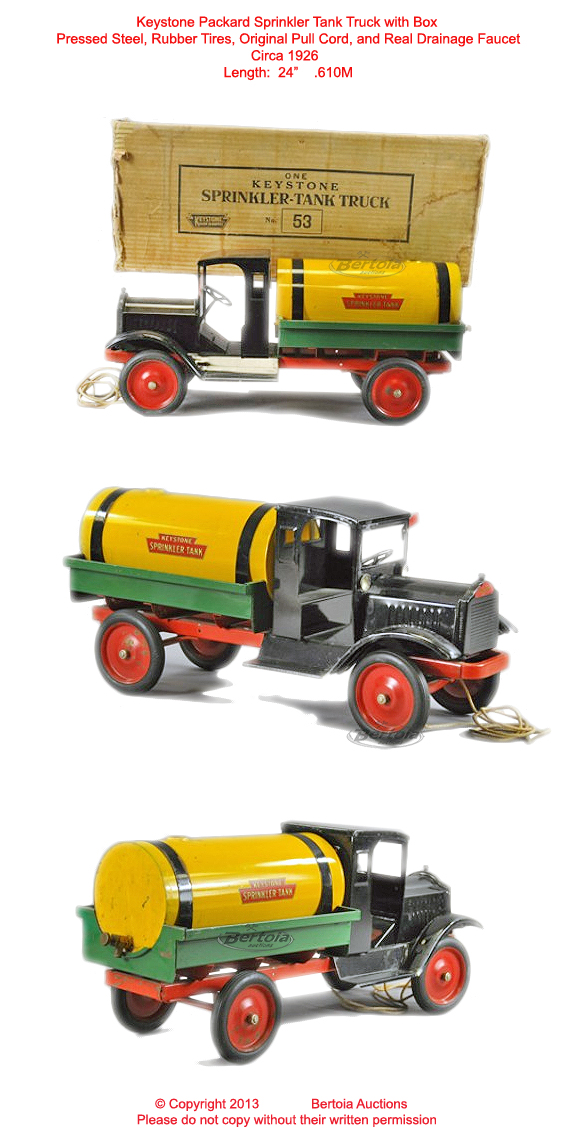 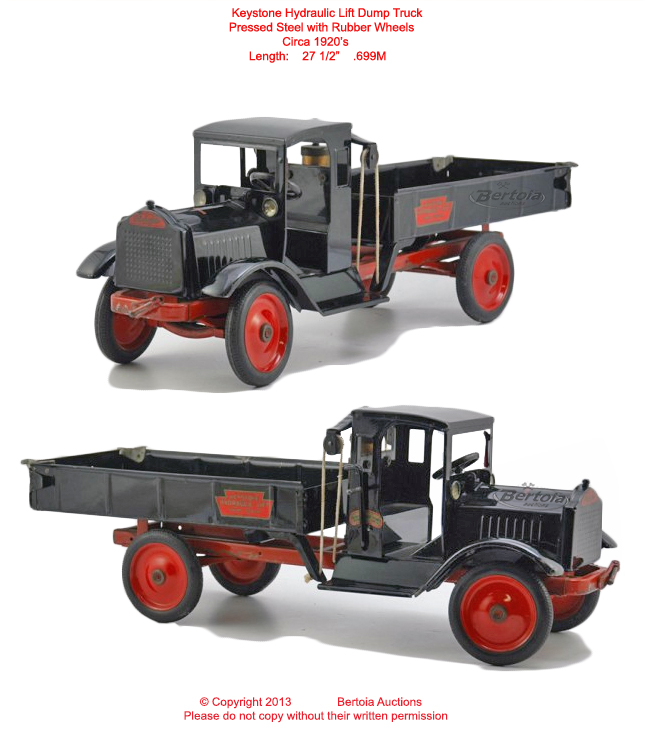 The barely-visible brass-coloiured item behind the cab was a hydraulic "piston" that allowed the load to be slowly and gently dumped from the truck bed. There was a pressure pump  in that round cylinder behind the cab of the truck. When pressurized, the water that had filled the tank would spray out in a strong jet. 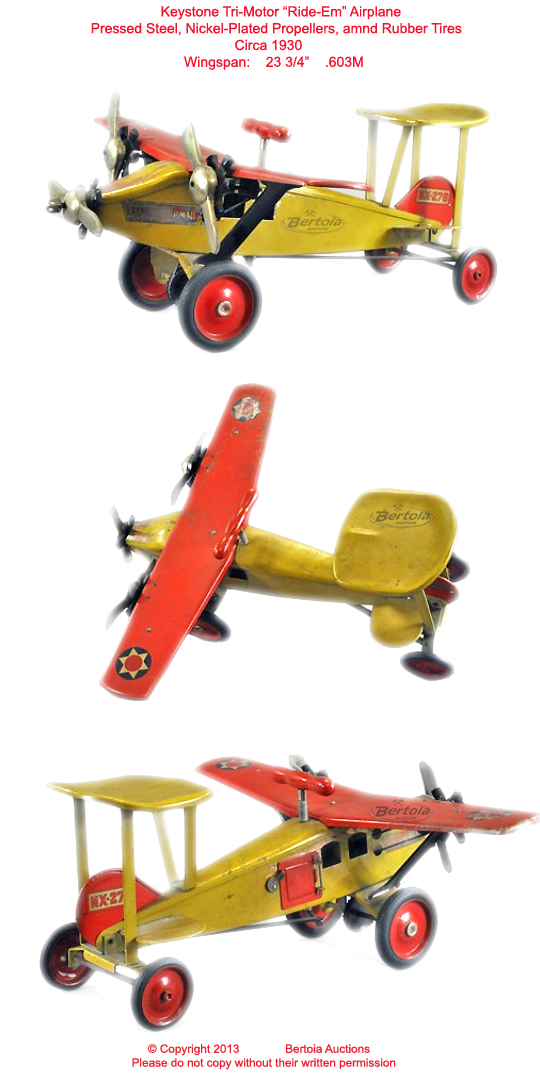 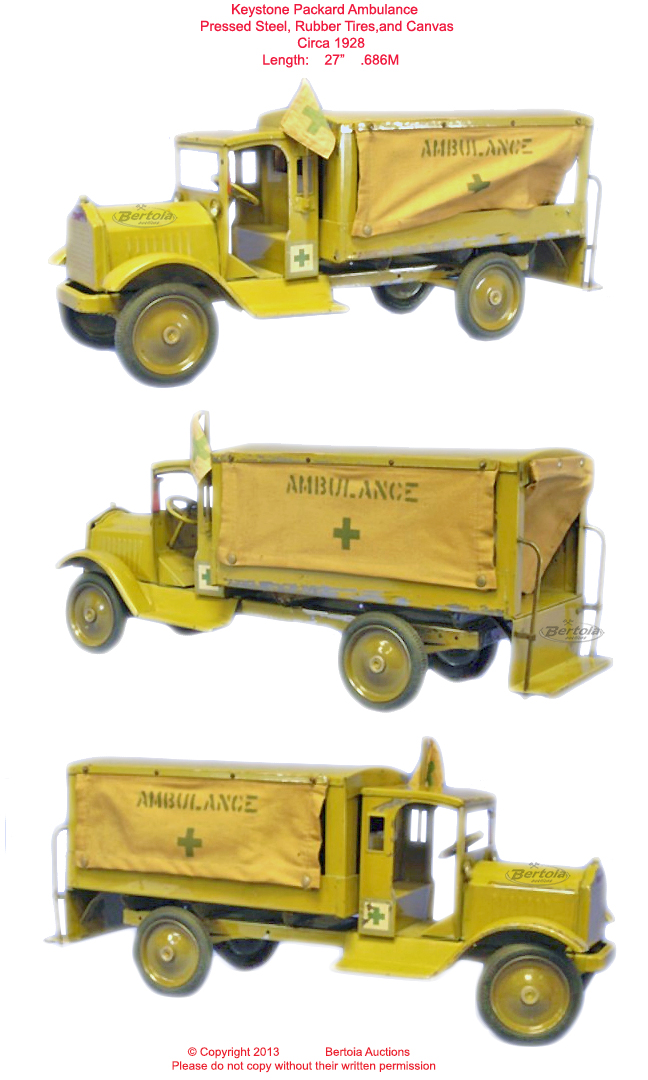 The wheel of the ambulance are not that colour. I didn't have the time to properly colour correct them to their true black. 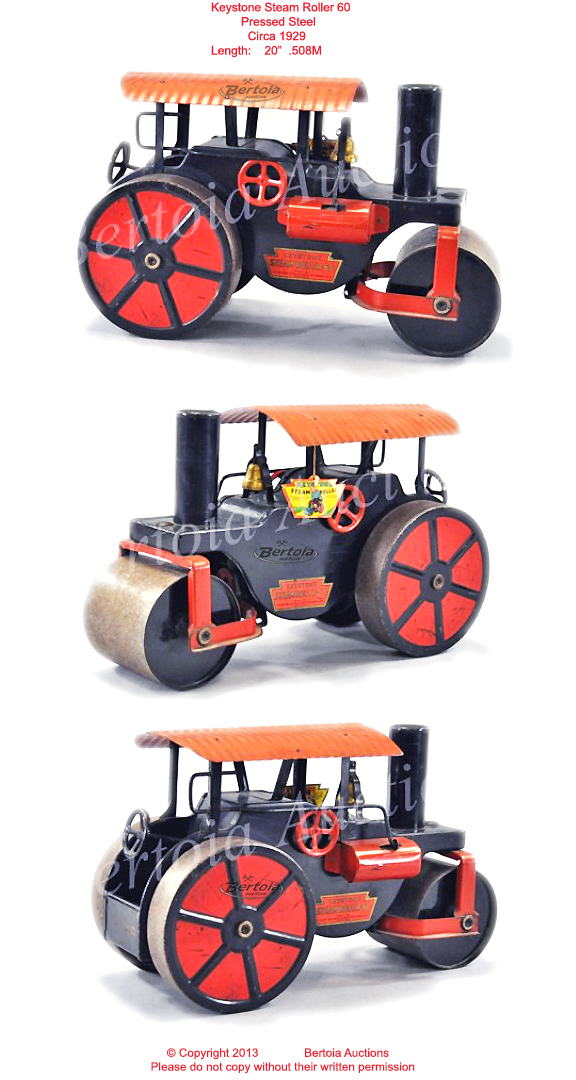 The Steam roller was the "top of the line" toy in the Keystone company.

and as always, have a great weekend,
or part of the day,wherever you may be.

Posted by toysearcher at 6:06 AM

GREAT SIGHT-----------I NEED A KEYSTONE PACKARD GRILL IN ANY SHAPE TO COMPLETE A FIRE TRUCK OR INFO HOW I CAN FIND ONE. THANKS FOXTOYS@NETZERO.NET

GREAT SITE FOR AWESOME TOYS FROM A TIME NOT LONG AGO.GREAT JOB BIATCHES

I have packard dump truck with dual wheels ( appears to be original ) has any one seen one ?

Stacey Bindman
writer of this blog