A Reader Shares His Toys and Stories

A Reader Shares His Toy and  Stories

I'm always looking and asking people to write to me with their photos and stories. However,  for whatever reason,most people don't. So when Mr. John Amalfitano wrote to me, and asked if I might want to use his photos on my blog, I naturally said "YES"! I suggested what lighting to use to best record the toys,  to send files sizes of at least 4" x 6" @ 300 pixels/inch (dots per inch), and to write some material or anecdotes about the toys. He did both (thank you, John),and his file sizes were very large, but I didn't mind. He had started with a very nice Katz Zeppelin. I forgot to ask him to send the sizes of the toys, but that's alright.

The toy below is a pull toy that was manufactured by Henry Katz.  For those who don't know, a "pull toy" is simply a toy that a child would pull behind with a string attached.
The company was only in business from about 1928-1931, when most-lilkely the great Depression took another toy company casualty. This toy is 21 1/2" ( .546M). John mentioned that it was missing a propeller and wheel.I suggested that he try Thomas Antique Toys or Classic Tin Toys for replacement parts.He had purchased this toy for a great price, and I sent him a link to e-bay to have him see what one of these sold for. 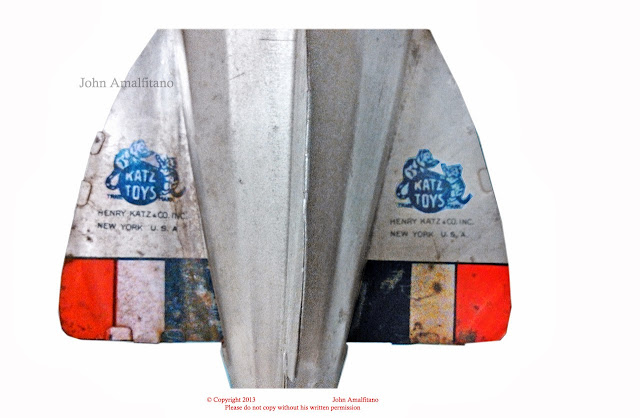 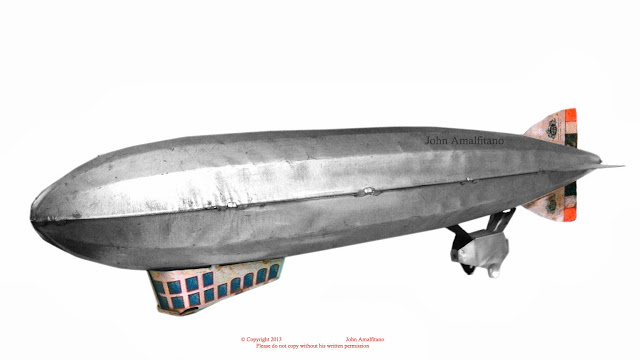 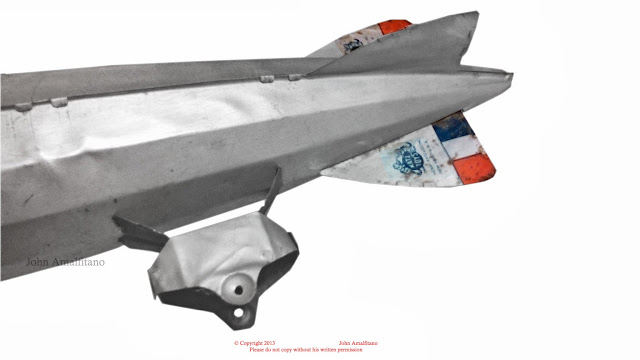 He also found this toy  below. It's an American-made to from the Unique Art Manufacturing Company.It's a tin lithographed wind-up toy that has the boy move in circles as his legs propel the tricycle.

John took the photos with his cell phone, and I was impressed with the large file size, and his photography. He had some mixed lighting (2 different fluorescent light sources) which you can see as pink and light blue shades. I think he might also have used the camera flash.  I liked the setting where he took the photos, and since John's a collector, I thought I 'd let the photos stay where they were photographed. 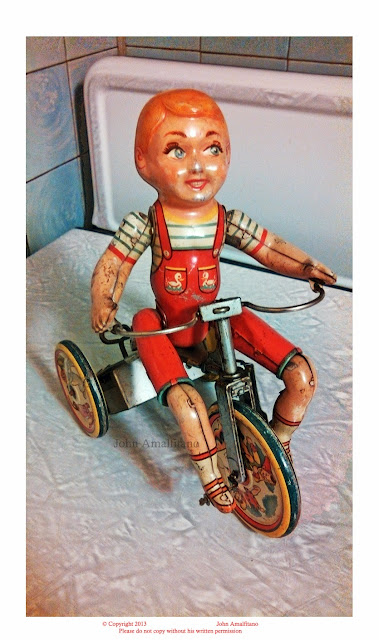 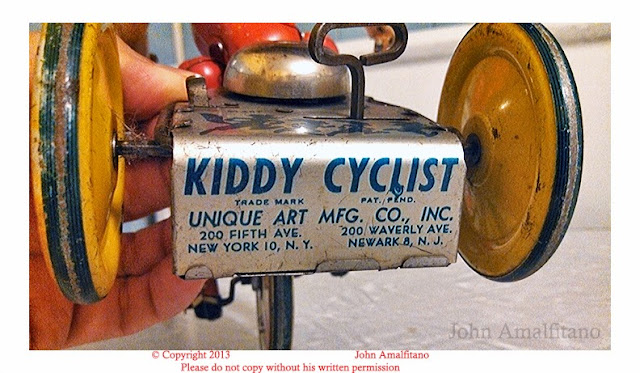 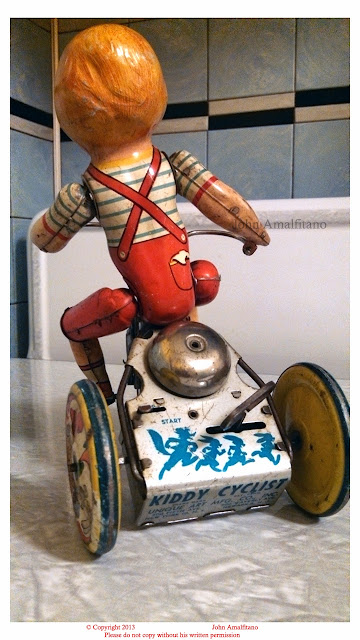 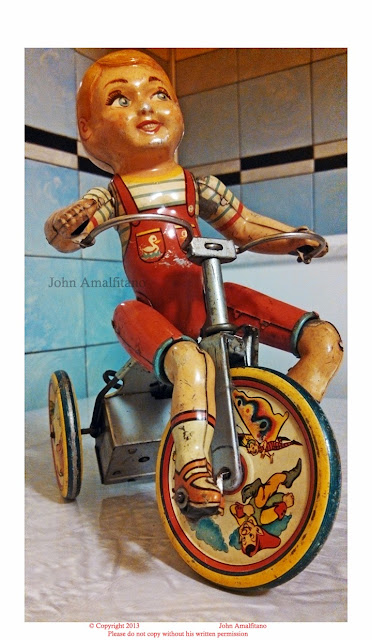 John had an elderly friend who gave him this wind-up German toy.  His friend had said that it belonged to his mother.When you wind it up, I think that the ears wiggle, and the legs move. John mentioned that he thought that the pig was missing a tail or part of it. I'll see if I can find out the name of the German manufacturer, and some more information. The toy is 3 1/2" ( 88.9mm in length. There were Japanese toy pigs that were similar to this,but the key certainly is more refined than the ones that came with the Japanese models. 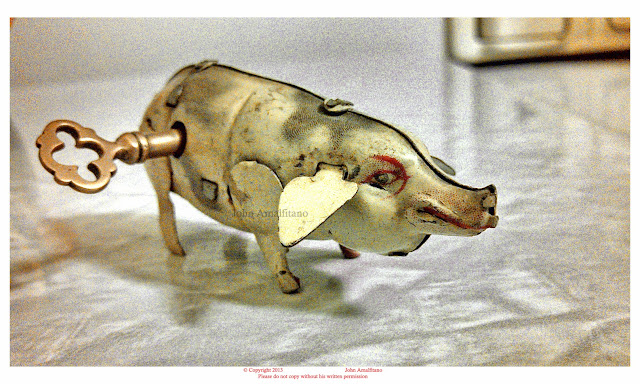 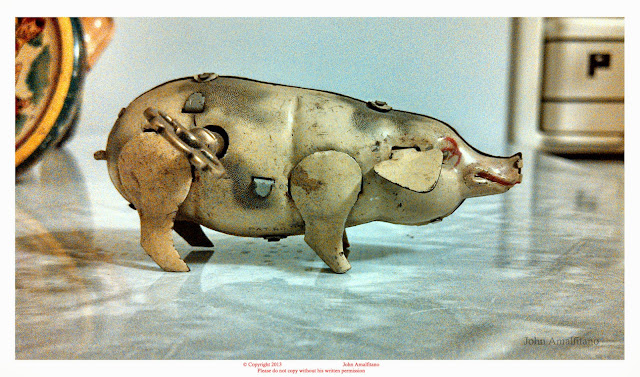 Finally, here's a fantastic toy.  It's a 1938 George Washington Bridge. The toy was missing the bus, so John hand-crafted it based on photographs. of an original example.  John found a small wind-up bus from West Germany, and then transformed it into his Greyhound model. Also, the belt and plate to which the bus attached to the bridge,had to also be hand crafted. He also painted the bus. I'd have to see what the "real" bus looks like, but I liked the hand-painted style and fond type that John added to the bus.

I assume John used his cell phone to do the filming. I liked the footage of the toy, and his moving and panning through this short film.  He's quite talented in filming as well as taking toy still photos.

So this is a fine start for the beginning of a new week.If anyone else is interested in helping me with my blog by sending photos and stores, I'm always "open for business".

and as always, have a great part of the day or night,
wherever you may be.
Stacey
toysearcher@gmail.com

And one final note;

I would like to thank everyone who has helped me in writing my blog and contributing to it. I had projected that I'd hit the 100,000 milestone sometime in November. However, for some unknown reason, I've  been getting lots of page views each day, such that evert 3 - 3 1/2 days 1000 page views occur. I have no way of knowing how many people are visiting, so I could have on any day 10 people reading 200pages altogether or 1 person doing the same, but the 1000,000 mark was certainly appreciated by me nevertheless.

Posted by toysearcher at 6:34 AM

That's the zeppelin from the Christmas Story movie.